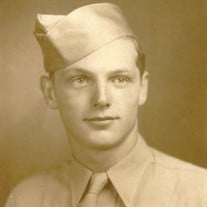 Roland C. Sowers, of York, entered into God’s eternal care on Wednesday, October 2, 2019, at 6:45 pm at Mt. Hope Nazarene Retirement Community in Lancaster, at the age of 94. He was the longtime companion of the late Donna L. (Sechrist) Lentz, who entered into rest on May 28, 2013. He was born on February 8, 1925, and was the son of the late Cleason and Oda (Carter) Sowers. Roland was a roofer, working last for Reams Roofing. He was a member of the American Legion Post #605 of Dallastown. He enjoyed going to the beach, boating, fishing, crabbing and spending winters in Florida. He was a member of Bethany UM Church in Red Lion. Roland was the father of Bonnie L. Crinnion of York, and Connie L. Albright and her husband James of York. He has six grandchildren, Vicki Cox, Shane Schaale, John Noel, Scott Noel, Melissa Gross, Michelle Heim; twelve great grandchildren, Brianna, Taylor, Zack, Brittany, Ashley, Danielle, Jordan, Justin, Nate, Sierra, Lathan, Dijaha and sixteen great great grandchildren, Kennedy, Caleb, Emma, Noah, Lynniah, Lianna, Noland, Kylie, Cameron, Jada, Neveah, Deshawn, Tyson, reese, rylynn and Cayden. He leaves a sister, Betty Bortner of York and a niece and nephew. Roland was preceded in death by two great grandsons, Ryan Heaton and Scott Noel. A viewing will be on Tuesday, October 8th, from 10 to 11 am at Burg Funeral Home, Inc., 134 W. Broadway, Red Lion. A Service of Honor and Praise for Roland will begin at 11 am at the funeral home, Rev. David D. Tietje, pastor of St. John’s United Church of Christ in Red Lion officiating. Burial will be in Susquehanna Memorial Gardens, with full military rites being presented by the York County Veterans Honor Guard. God saw you getting tired, and a cure was not to be, so He put his arms around you, and whispered, “Come to me.” A golden heart stopped beating, hardworking hands now rest, He broke our hearts to prove to us, He only TAKES THE BEST. In lieu of flowers, contributions may be offered in memory of Roland to: York County Veterans Honor Guard, PO Box 712, Mt. Wolf, PA 17347.

Roland C. Sowers, of York, entered into God&#8217;s eternal care on Wednesday, October 2, 2019, at 6:45 pm at Mt. Hope Nazarene Retirement Community in Lancaster, at the age of 94. He was the longtime companion of the late Donna L. (Sechrist)... View Obituary & Service Information

The family of Roland C. Sowers created this Life Tributes page to make it easy to share your memories.

Send flowers to the Sowers family.