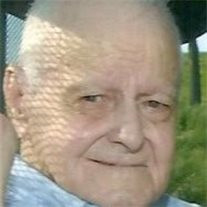 Roy G. Jackson, Sr., 98, entered into eternal rest after a brief illness on Thursday, October 10, at Manor Care South. He was the husband of the late Mildred E. (Daugherty) Jackson for 68 years . Born in York on April 1, 1915, he was the son of the late John W., II and Lottie (Sheffer) Jackson. Roy was a farmer in both York and North Hopewell Townships, specializing in dairying and custom farming. He was a director with the former Farm Bureau, now known as Agway, and was very involved with that merger. He served as both member and Chairman of the North Hopewell Planning Commission. Roy had been the oldest surviving life member of Christ United Methodist Church in Jacobus. Roy is survived by three sons, Donald L. Jackson, Sr. and wife, Ann of Red Lion, Richard E. Jackson and wife, Loretta of Red Lion, and Roy (Butch) G. Jackson, Jr. and wife, Lisa of Felton; and a daughter, Barbara E. Hoffmaster and husband, Paul of Cammal, Pa. He is also survived by 12 grandchilren, Wanda, Charlene, Carlene, Sherry, Donald Jr., Wendy, Debra, Lori, Tad, Steven, Stephanie, and Andrew; 27 great-grandchildren; nine great-great-grandchildren; two brothers, Lester Jackson and Robert Jackson, both of York; two sisters, Myrtle Myers of York and Evelyn Smith of Shrewsbury; and numerous nieces and nephews. Roy was preceded in death by two brothers, Paul and John Jackson; and two sisters, Mary Gladfelter and Dorothy Smith. There will be a viewing Tuesday, October 15, from 9 to 11 a.m. at Christ U.M. Church, 200 N. Main St., Jacobus. Burg Funeral Home, Inc., 134 W. Broadway, Red Lion, will be assisting the family with arrangements. A Service of Honor and Praise for Roy will be on Tuesday, October 15, at 11 a.m. at Christ U.M. Church, 200 N. Main St., Jacobus. The Rev. David B. MacKenzie, pastor of Bridgeway Community Church in York will officiate. Burial will be at Christ U.M. Church Cemetery in Jacobus. In lieu of flowers, contributions may be offered to Christ U.M. Church, 200 N. Main St., Jacobus, PA 17407. Roy was a wonderful Father and Grandfather who always put his family first. He enjoyed farming all of his life and worked very hard. He will be greatly missed by all who knew and loved him. The family would like to extend a very special thank you to the staff of Manor Care South and to the staff of The Haven at Springwood.

Roy G. Jackson, Sr., 98, entered into eternal rest after a brief illness on Thursday, October 10, at Manor Care South. He was the husband of the late Mildred E. (Daugherty) Jackson for 68 years . Born in York on April 1, 1915, he was the son... View Obituary & Service Information

The family of Roy G. Jackson, Sr. created this Life Tributes page to make it easy to share your memories.

Send flowers to the Jackson, family.