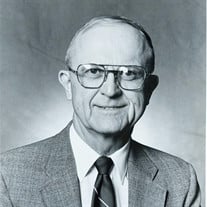 Roy Richard “Dick” Starner, Jr. died on July 12, 2018 at the age of 89. His wife of 47 years, Rita Kay (Marshall) Starner, preceded him in death, and he is survived by their son, Thad Eugene Starner of Atlanta and his wife Tavenner Hall; a brother Keith Starner of York and his wife Mary Jane; and a sister Janice Welker of Mentor, OH and her husband William. His sister Kathleen Turner of Biglerville, PA preceded him in death. Born on August 27, 1928 in Bendersville in Adams Co., Pennsylvania, Dick was the son of Roy R. Starner, Sr. and Edna Hoffman Starner. He graduated from Biglerville High School in 1946 and Penn State College in 1950 with a bachelor's degree with honors in electrical engineering. He served in the Army during the Korean War at Fort Dix from 1950-52. Dick Starner worked for Westinghouse and G.E. and retired from Met-Ed on October 31, 1992 after 37 years as a Distribution Engineer. He was a member of Christ Lutheran Church in Dallastown for over 40 years, served on the Church Council for four years, was the Sunday School secretary for 25 years, and served on various committees. Known for his meticulous nature and sense of fairness, Dick would take care and pride in everything he did, whether it be laying out the power grid for downtown York, teaching his son arithmetic through flashcards, advising church policy, totaling the weekly offerings, or balancing high on a ladder to change the lightbulbs in the sanctuary. Memorial Service for Dick will be on Sunday, July 15th at 2:00 pm at Christ Lutheran Church, 126 W. Main Street, Dallastown. There will be no viewing. Visitation will be at the reception following the service. Burg Funeral Home, Inc., 134 W. Broadway, Red Lion, (717) 244-4567, will be assisting with the arrangements. Burial will private at Dallastown Union Cemetery. Memorial donations, in lieu of flowers, may be made to Christ Lutheran Church, 126 W. Main St., Dallastown, PA 17313.

The family of Roy Richard "Dick" Starner Jr. created this Life Tributes page to make it easy to share your memories.

Send flowers to the Starner family.