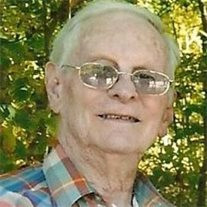 Russell "Russ" K. Hamberger, 89, entered into rest unexpectedly on Saturday, March 9, 2013, at his residence. He was the husband of Jean E. (Demmitt) Hamberger, who entered into rest on December 27, 2006. He was born in York, on October 5, 1923, and was the son of the late Charles and Katie (Krout) Hamberger. Russ was a machinist at the former Reed Co., retiring in 1989. He served in the U.S. Navy during World War II. He is survived by a daughter, Penny L. Becker of York Haven, and a son, James "Jim" M. Hamberger of York; five grandchildren; seven great-grandchildren; one great-great-grandson; two sisters, Gladys Eby of York and Dorcas Transeau; and nieces and nephews. He was preceded in death by 10 siblings. Visitation will be on Friday, March 15, from 12 to 1 p.m. at Burg Funeral Home, Inc., 134 W. Broadway, Red Lion, followed by a 1 p.m. service. The Rev. Keith J. Schmuck, pastor of Winterstown United Methodist Church in Felton, will officiate. Burial will be at Susquehanna Memorial Gardens with full military rites by the York County Veterans Honor Guard. In lieu of flowers, contributions may be offered to York Health Foundation, Cancer Patient Help Fund, 912 S. George St., York, PA 17403. Russell was happily married to Jean for 63 wonderful years. The sadness they felt while they were apart has turned into joy once more in each heart. On March 9 they embraced with a love that will last forever. And then, side-by-side on the Rainbow Bridge they crossed over to be together again. Online condolences may be made at www.BurgFuneralHome.com

The family of Russell "Russ" K. Hamberger created this Life Tributes page to make it easy to share your memories.