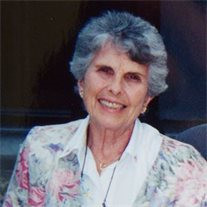 Ruth Hood Knisley, 92, formerly of Red Lion, entered into eternal peace on July 9, 2015, at Normandie Ridge Nursing Care Center, York. She is survived by Rev. Bruce F. Knisley, her beloved husband of 69 years; her children, Cynthia Knisley of West Chester, Stephen Knisley (Diane) of Siler City, N.C. and Mary Loyer (Jim) of Red Lion; grandchildren, Andrew, Amy, Julie, Matthew, Samuel, Emily, Kenneth and Ruth; 12 great-grandchildren; and many nieces and nephews. Ruth was preceded in death by three brothers, Edward Hood of Charlotte, N.C., Robert Hood of Birmingham, Ala., and William Hood of Naperville, Ill. Ruth, daughter of Rev. Samuel Jefferson and Mary Whitesides Hood, was born in Unity, S.C., on September 30, 1922. She graduated from Furman University with a Bachelor's degree in music education and then completed the Johns Hopkins University School of Nursing Cadet Nurse Corp. Program. Ruth and Bruce met in Baltimore and were married there on August 20, 1946. In 1952, they moved to York, where they served Yorkshire United Methodist Church. During this time, Ruth worked as a registered nurse at York Hospital, taught private piano lessons, and served as a third grade teacher at Country Day School of York. She was a member of Matinee Music Club of York. In 1970, Bruce and Ruth moved to Lewisburg, where they served Beaver Memorial United Methodist Church. From 1970 - 1978, Ruth was Director of Nursing at the United Methodist Home in Lewisburg (now Riverwoods). In 1987, Bruce and Ruth moved to Hanover, where they served Grace United Methodist Church. They retired in Red Lion in 1997, where she was a member of St. Paul's United Methodist Church, Red Lion. From 1987 - 1996, Ruth worked as a registered nurse at Hanover Hospital. She served 12 years on the Executive Board of the Quincy United Methodist Nursing Home in Quincy, Ruth will be remembered and honored by her loving family and many friends. Viewing will be held on Sat., July 18, 2015 from 10 to 11 a.m. in the All Purpose Room Chapel at Normandie Ridge, 1700 Normandie Drive, York. A Celebration of her Life Service will begin at 11 a.m. in the chapel, with the Rev. David L. Brinker, Chaplain of Normandie Ridge Retirement Community, officiating. Arrangements are in the care of Burg Funeral Home, Inc., 134 W. Broadway, Red Lion. Burial will be private and at the convenience of the family at Red Lion Cemetery. In lieu of flowers, memorial gifts may be sent to the Johns Hopkins University School of Nursing, 525 N. Wolfe St., Baltimore, MD 21205; or to the American Cancer Society , 924-N Colonial Ave., York, PA 17403; or to Heartland Hospice, 3417 Concord Road, Suite C, York, PA 17402-9001. Online condolences may be offered at www.BurgFuneralHome.com

The family of Ruth H. (Hood) Knisley created this Life Tributes page to make it easy to share your memories.