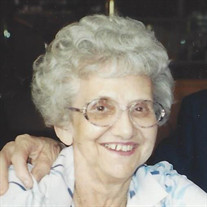 Ruth N. (Kauffman) Koons, formerly of Red Lion, entered into God’s eternal care on Wednesday, April 3, 2019 at 1:15 pm at Providence Place Nursing Home in Dover at the age of 93. She was the wife of the late Charles H. Koons who entered into rest on December 5, 2005. She was born in Yorkanna , on January 17, 1926 and was the daughter of the late Harry F. and Cleita E. (Rexroth) Kauffman. Ruth was a Red Lion High School graduate of the Class of 1943, where she was an Honors Student. The Ruth went on to work as a bookkeeper and secretary at the former First National Bank, Southern Pennsylvania Bank, Wolf Brothers and the Red Lion Borough, retiring in 1971. Ruth was a long time member of St. John’s United Church of Christ in Red Lion, a former Board member of the New Eastern Market and she was an avid reader and enjoyed doing various crafts. She is survived by a son, David H. Koons of Dallastown, and three daughters, Jane C. Koons of York, Denise A. Koons and husband Donald Small of Hanover, and Danette Koons of York. She was the loving grandmother to Tanya Beck and Chad Ehrhart, and great grandmother to Rachel Beck and Brittany Beck. She also had several nieces and nephews. Ruth was preceded in death by her son, Jeffrey C. Koons on September 23, 2013 and her sister Helen DiMello. There will be no viewing. A Graveside service to Honor and Praise Ruth’s life will be at 10:30 am on Monday, April 8th. Those attending the service are asked to meet at Red Lion Cemetery, just prior to the start of the service. Her pastor, Rev. David D. Tietje will officiate. In lieu of flowers, contributions may be offered to. St. John’s United Church of Christ, 161 N. Main Street, Red Lion, PA 17356, or to Heartland Hospice, 3417-C Concord Road, York, PA 17402 www.BurgFuneralHome.com

Ruth N. (Kauffman) Koons, formerly of Red Lion, entered into God&#8217;s eternal care on Wednesday, April 3, 2019 at 1:15 pm at Providence Place Nursing Home in Dover at the age of 93. She was the wife of the late Charles H. Koons who entered... View Obituary & Service Information

The family of Ruth N. (Kauffman) Koons created this Life Tributes page to make it easy to share your memories.

Send flowers to the Koons family.