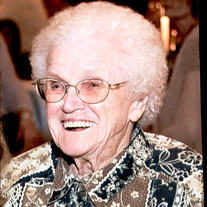 Ruth V. (Atkins) Miller, formerly of Airville, passed away peacefully with family by her side, on Wednesday, March 23, 2022, at 10 am from Misericordia Nursing Home in York, at the age of 97. She was the wife of the late Samuel C. Miller who entered eternal life on March 19, 2007. She was born in Sunnyburn, on March 1, 1925, and was the daughter of the late Preston E. and Lizzie (Urey) Atkins. Ruth graduated from Chanceford High School and was a homemaker, taking care of her family. She was a member of the Kreutz Creek Presbyterian Church in Hellam, and she enjoyed putting puzzles together, crocheting, sewing, and baking. Ruth and Samuel had three children; Samuel C. Miller, Jr. and his wife Anne of York, John D. Miller and his wife JoAnn of York and Steven C. Miller who preceded her death on April 25, 2011. She was the grandmother of eight grandchildren, Eric and Jenny of York, Jason and Guang of Lancaster, Marisa and Patrick of FL, Mori and Greg of Red Lion, Steven and Crystal of Akron, Jennilyn and Chris of Lebanon, PA, Jeremiah and Ellen of NC and Jannessa and Anthony of Lancaster, eight great grandchildren and four great great grandchildren, and the mother-in-law of Darla Miller of Red Lion. Ruth also has several nieces and nephews. There will be no viewing for Ruth. Family and friends are invited to extend their condolences on Saturday, March 26th, from 10-11 am at Burg Funeral Home, Inc., 134 W. Broadway, Red Lion. A Service of Honor and Praise for Ruth will begin at 11 am at the funeral home, with Rev. David D. Tietje, pastor of St. John’s United Church of Christ officiating. Burial will take place on Monday, March 28th, at Chanceford Presbyterian Cemetery. If you would like to attend, please meet at the cemetery. In lieu of flowers, contributions in memory of Ruth may be offered to: Kreutz Creek Presbyterian Church, 85 Old Church Lane, York, PA 17406.

Ruth V. (Atkins) Miller, formerly of Airville, passed away peacefully with family by her side, on Wednesday, March 23, 2022, at 10 am from Misericordia Nursing Home in York, at the age of 97. She was the wife of the late Samuel C. Miller who... View Obituary & Service Information

The family of Ruth V. (Atkins) Miller created this Life Tributes page to make it easy to share your memories.