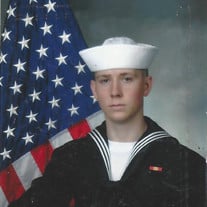 Ryan M. Wiltsie, of York, passed from his earthly life, unexpectedly, on Monday, July 6, 2020, in Carrollton, GA., at the age of 25. He was the son of mother Mary Beth (Neely) Wiltsie, father Dean S.Wiltsie and step mother Eugenie F. Wiltsie of York. Ryan was born in York on April 4, 1995. He graduated from Central York High School, Class of 2013. He loved all sports, especially soccer, hiking, snowboarding, skate boarding, but most of all, he adored his nieces and spending time spoiling them. After High School, he attended Beaver County Community College before enlisting in the United States Navy and serving for five years as an Avionics Technician. During his time in the military, he received the Good Conduct Medal, Navy and Marine Corp Achievement Medal, National Defense Service Medal, Navy Pistol Sharpshooter Ribbon, Sea Service Deployment Ribbon, and the Global War on Terrorism Service Medal. Following his Honorable Discharge in April, he enlisted with the United States Navy Reserves. Besides his parents, Ryan leaves his two sisters, Nicole L. Nichols and her husband Brian of Carrollton, GA., and Lauran M. Shire and her husband Brian of Exton, PA. He was the doting uncle to Leah, Kennedy and Macie. He also leaves his paternal grandparents, Donald, and Elizabeth (Flannery) Wiltsie of York and many loving Aunts, Uncles and Cousins. There will be no viewing. Family and friends may extend their condolences on Wednesday, July 22nd, from 10 to 11 am at Burg Funeral Home, Inc., 134 W. Broadway, Red Lion. A Memorial Service to Honor and Praise Ryan will begin at 11 am at Susquehanna Memorial Gardens, with his uncle, Ralph Neely, offering the Eulogy. Full military rites will be offered by the York County Veterans Honor Guard. In lieu of flowers, contributions may be offered to: Wounded Warrior Project, PO Box 758516, Topeka, KS. 6675-8516

The family of Ryan M. Wiltsie created this Life Tributes page to make it easy to share your memories.

Send flowers to the Wiltsie family.