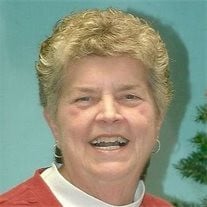 Sandra "Sandy" "Gannaw" M. (Hake) Masenheimer, 71, went from life to life eternal surrounded by her loving family on Wednesday, December 31, 2014. She was born in Wrightsville, on December 15, 1943, and was the daughter of the late George W. and Dorcas E. (Arnold) Hake. Sandy was a machine operator at the former Flinchbaugh Products in Red Lion, retiring in 2006 after 39 years of service. She was a longtime member of Salem United Methodist Church in Windsor and she served as secretary for the Sunday School Class #4. She was a member of the Red Hatters, Tops Club of Red Lion, and Curves in Red Lion. She also sang in the choir at the Susquehanna Senior Center. She loved being at the beach and celebrating Christmas. Her Sunday family meals were open to anyone who wanted to join. Her table was always open. She will be greatly missed by all her family and many loving friends. She leaves to cherish her memory two daughters, Teesi R. Griffith of Red Lion, and Joy A. Flinchbaugh and her husband, Brady of Felton; four grandchildren, Mandi Kuhns, Katie Conaway, Christopher Flinchbaugh, and Bailey Flinchbaugh; two great-grandchildren, Adelyn Conaway and Natalie Kuhns; a niece, Arlette Harry; and a nephew, Roger Hake. She was preceded in death by a brother, Harry Hake. Viewing for Sandy will be on Monday, January 5, from 6 to 8 p.m. at Burg Funeral Home, Inc., 134 W. Broadway, Red Lion, and Tuesday, January 6, from 9 to 10 a.m. at Salem United Methodist Church, 460 Salem Church Road, Windsor. A Service of Honor and Praise for Sandy will begin on Tuesday at 10 a.m. at the church with her pastor, the Rev. Kathy Harvey-Nelson, officiating. Burial will be at Springville Cemetery. In lieu of flowers, contributions may be offered to Salem United Methodist Church, 460 Salem Church Road, Windsor, PA 17366.

Sandra "Sandy" "Gannaw" M. (Hake) Masenheimer, 71, went from life to life eternal surrounded by her loving family on Wednesday, December 31, 2014. She was born in Wrightsville, on December 15, 1943, and was the daughter of the late George W.... View Obituary & Service Information

The family of Sandra M. Masenheimer created this Life Tributes page to make it easy to share your memories.

Send flowers to the Masenheimer family.