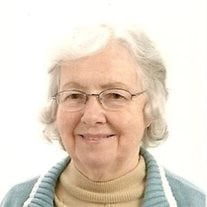 Sara E. (Green) Gladfelter, 84, entered into eternal rest after a lengthy illness on Sunday, July 28, 2013, at the Haven at Springwood. She was the wife of Edison "Glady" G. Gladfelter, who entered into rest on March 12, 2012. She was born in Woodbine on December 25, 1928, the daughter of the late Amos and Clara B. (Woods) Green. Sara was employed at a sewing factory. She later became the janitor of Red Lion Area High School, retiring after many years of service. She was a longtime member Bethany United Methodist Church in Felton where she sang in the Choir and was the former secretary for the Loyal Mothers. She was also a member of the Felton Fire Company Ladies Auxiliary. She is survived by a daughter, Beth A. Swartz and husband Dean of Felton; two grand-daughters, Deanna Coble and husband Steve of Red Lion and Jenna Swartz of Felton; two great-grandchildren, Ryne and Dax; one step granddaughter, Denise Edeblute and husband Larry of Dover; three step great-grandchildren, Hope, Brittany, and Larry; one step great-great-granddaughter, Nevaeh; one brother, Roy Green and wife, Tillie of Georgia; three sisters, Pauline Tompkins and husband Raymond of Brogue, Esther Kreeger and husband, Earl of Winterstown, and Bertha Thompson of Bel Air, Md.; and numerous nieces and nephews. She was preceded in death by a brother, Delbert Green. There will be a viewing on Wednesday from 6 to 8 p.m. and Thursday from 9 to 10 a.m. at Burg Funeral Home, Inc., 134 W. Broadway, Red Lion. The funeral service will be 10 a.m. Thursday at the funeral home, with the Rev. David D. Tietje, of St. John's United Church of Christ, officiating. Burial will be in Susquehanna Memorial Gardens. In lieu of flowers, contributions may be offered to: Bethany United Methodist Church, 49 High St., Felton, PA 17322. Sara enjoyed going to the Felton baseball games, shopping with her dear friend, Virginia, but most of all loved spending time with her daughter, son-in-law, and grandchildren who she adored greatly. She will be sadly missed by all who knew and loved her. Online condolences may be made at www.BurgFuneralHome.com.

Sara E. (Green) Gladfelter, 84, entered into eternal rest after a lengthy illness on Sunday, July 28, 2013, at the Haven at Springwood. She was the wife of Edison "Glady" G. Gladfelter, who entered into rest on March 12, 2012. She was born in... View Obituary & Service Information

The family of Sara Gladfelter created this Life Tributes page to make it easy to share your memories.

Send flowers to the Gladfelter family.