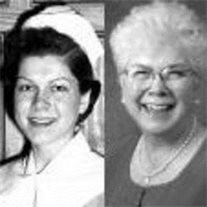 Sarah J. (Cook) Markel, 78, entered into rest on Tuesday, January 6, 2015, at Rest Haven after a lengthy illness. She was the wife of Luther J. Markel, whom she married on August 17, 1996, and William L. Downs, who entered into rest on August 1, 1985. She was born in York, on June 16, 1936, and was the daughter of the late Lloyd W. and Mary D. (Gochenour) Cook. Sarah was a School Nurse, retiring from the Eastern School District. In addition to working as a school nurse, Sarah spent many summers as the resident nurse at the girl scout camp, Echo Trail. Sarah was an exceptional seamstress and was happiest when volunteering her time through community service. She was a member of Pleasant Grove United Methodist Church, where she played the organ and served on several committees. She was a former member of Bethany United Methodist Church, where she taught children's Sunday School for many years. In addition to her husband, Luther, she is survived by a daughter, Sally J. Sears and husband, David of York; a stepson, Dirk E. Markel of York; a granddaughter, Erin N. Doemland and husband, Christopher of York; a great-granddaughter, Amelia; and several nieces and nephews. She was preceded in death by her son, Steven Downs; two brothers, Warren and Robert Cook; and her sister, Hannah Westley. There will be a viewing from 1 to 2 p.m. Friday, January 9, 2015, at Pleasant Grove (East End) United Methodist Church, 900 Pleasant Grove Road, Red Lion. Burg Funeral Home, Inc., 134 W. Broadway, Red Lion, will be assisting the family with the arrangements. A Service of Honor and Praise for Sarah will begin at 2 p.m. on Friday at the church with her pastor, Samantha McElwee, officiating. Burial will be at Red Lion Cemetery. In lieu of flowers, contributions may be offered to Pleasant Grove United Methodist Church, 900 Pleasant Grove Road, Red Lion, PA 17356; or to Heartland Hospice, 3417-C Concord Road, York, PA 17402.

The family of Sarah J. Markel created this Life Tributes page to make it easy to share your memories.

Send flowers to the Markel family.