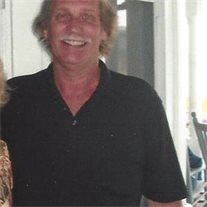 Shawn Edward Rineholt, Sr. of Windsor, entered into rest on Saturday, May 5, 2018 at York Hospital at 1:14 am at the age of 56. He was the husband of Kim Diana (Witmer) Rineholt to whom he married on May 12, 1990, soon to celebrate 29 years together. He was born in York on October 7, 1961 and was the son of Kathryn M. (Horn) Rineholt of Red Lon and the late Charles E. Rineholt who entered into rest in 2009. Shawn was a self-employed truck driver, working as an independent contractor for moving companies until 2003. He was a member of the National Rifle Association, Craley Fish and Game. He enjoyed hunting, fishing and being outdoors. Besides his wife, Kim and mother, Kathryn, he leaves a son, Shawn E. Rineholt, Jr. of Windsor and a daughter, Selina L. Rineholt of Windsor. Mother in law, Bonnie L. Bialcak and her husband James, two brother in law, Lester Witmer, II of TN and William E. Bialcak of UT. , several nieces, nephews, aunts, uncles and cousins. He was preceded in death by a daughter, Angela Rineholt who entered into rest in 2010, a sister, Andrea Toomey in 2015 and his father in law, Lester Witmer, Sr. in 2007. Viewing will be on Wednesday, May 9th, from 10-11 am at Burg Funeral Home, Inc., 134 W. Broadway, Red Lion. A Service to Honor and Praise Shawn's life will begin at 11 am at the funeral home with Pastor Kevin Becker, of Salem United Church of Christ in Jacobus, officiating. Burial will be at Bethlehem Stonepile UM Church cemetery. In lieu of flowers, contributions may be offered to the Wild Life Conservation Society, Attn: Donations, 2300 Southern Blvd., Bronx, NY 10460. Shawn was a wonderful husband and father. He was always friendly and jolly to everyone. In life we loved you dearly, in death we love you still. In our hearts we hold a place, that only YOU CAN FILL. www.BurgFuneralHome.com

The family of Shawn Edward Rineholt, Sr. created this Life Tributes page to make it easy to share your memories.

Send flowers to the Rineholt, family.