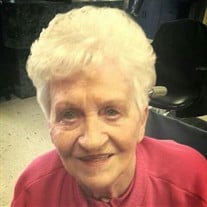 Shirley A. (Druck) Blymire, formerly of Felton, entered into rest on Sunday, September 27, 2020 at Colonial Manor at 11:35am at the age of 85. She was the wife of the late Murray A. Blymire who entered into rest on March 22, 1995. She was born in Felton on February 27, 1935 and was the daughter of the late Stanley and Viola (Druck) Seaks. Shirley worked at Wm Tally House Restaurant where she prepared salads and desserts for the guests. She enjoyed watching old time TV, but mostly enjoyed the Golden Girls, MASH and Roseanne. Shirley prepared all her holiday family meals and enjoyed spending time with her family & loved ones. She is survived by her daughter, Linda M. Diehl (Larry) of Glen Rock and son, Richard E. Blymire of York. Shirley was the grandmother to Bobbi Jo Merryman, Kerry Howard, Jr., Richard Blymire, Jr., Gregory Blymire, Jr., Shawn Michael Blymire and Michelle Blymire, as well as a great grandmother to several great grandchildren and one great-great grandchild. Shirley leaves behind six siblings, Jimmy Seaks, Larry Seaks, Donald Seaks, Art Seaks, Bonnie O’Neil and Donna Osborne. She was preceded in death by her son, Gregory C. Blymire, Sr. and several of her siblings. Cremation took place with Burg Funeral Home, Inc., 134 W. Broadway, Red Lion. There will be no service and burial is at the convenience of the family. In lieu of flowers, memorial contributions may be offered to the York County SPCA, 3159 N. Susquehanna Trail, York PA 17406.

The family of Shirley A. (Druck) Blymire created this Life Tributes page to make it easy to share your memories.

Shirley A. (Druck) Blymire, formerly of Felton, entered into...

Send flowers to the Blymire family.