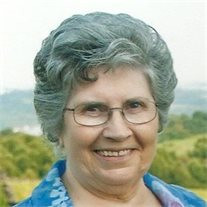 Shirley Elaine (Arndt) Pilkerton, entered into eternal rest after a brief illness on Wednesday, September 9, 2015, at 5:56 p.m. at Manor Care-North at the age of 77. She was the wife of Frank J. Pilkerton. Shirley was born in York on September 18, 1937, and was the daughter of the late Wilbur Heisey and Grace Helene (Osborne) Arndt. Shirley worked at the former McCory's Corp. in York as a Supervisor. She also worked at CJ Doudrick's in York and for a No-Kill Animal Shelter. Survivors, in addition to her husband, include four children, Karen J. McMaster and husband, William of York, Gregory A. Sweitzer and wife, Theresa of Manchester, Beverly J. Fillmore and husband, Larry of York, Michele R. Barshinger and husband, Rick of Dover; six grandchildren; eight great-grandchildren; four siblings, Wilburetta Gibbs, Franklin Arndt, Bonnie Slagle and Gerald Arndt; numerous nieces and nephews; and her beloved Maltese, Bella. She was preceded in death by a sister, Patricia Arndt; and her baby brother, Eugene Arndt. Viewing will be held Monday, Sept 14 from 9 to 10 a.m. at Burg Funeral Home, Inc., 134 W. Broadway, Red Lion. A Service of Honor and Praise for Shirley will begin at 10 a.m. at the funeral home with Pastor Brian Witmer, of Red Lion Bible Church, officiating. Burial will be in Susquehanna Memorial Gardens. Contributions in Shirley's memory may be offered to Our Daily Bread Soup Kitchen, 2251 Willow Road, York, PA 17408. Shirley married Frank on November 15, 1982, celebrating 33 years together. Her family was very important to her and she looked forward to the times they would all be together at family gatherings. A big tradition in Shirley's family was "Cookie Day," she had a passion for food and was an amazing cook, famous for her Apple Dumplings and most of all her homemade Ice Tea. Shirley had a great love for cats and was an avid Heisey Glass collector. She enjoyed bird watching, McCoy Pottery and relaxing with a cross word puzzle. Gone but not forgotten, now, safely kept in our hearts, until we meet again. We will love you forever. Online condolences may be offered at www.BurgFuneralHome.com

Shirley Elaine (Arndt) Pilkerton, entered into eternal rest after a brief illness on Wednesday, September 9, 2015, at 5:56 p.m. at Manor Care-North at the age of 77. She was the wife of Frank J. Pilkerton. Shirley was born in York on September... View Obituary & Service Information

The family of Shirley Elaine (Arndt) Pilkerton created this Life Tributes page to make it easy to share your memories.