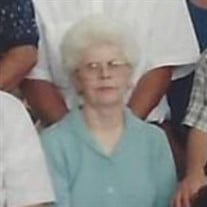 Shirley M. (Glatfelter) Alwood, closed her eyes, when her Savior called and went to her eternal home on Sunday, October 4, 2020, at 2:15 am at Manor Care South York, at the age of 83. She was the wife of the late Gerald C. Alwood, who entered into rest on April 19, 2001. She was born in Dallastown, on October 5, 1936 and was the daughter of the late Raymond C. Glatfelter, and Iva K. (Thoman) Glatfelter Shaffer. Shirley graduated from Susquehannock High School, Class of 1954, and over the years she worked in the food industry for several different companies in the York area. She was a longtime member of the Greenmount United Methodist Church in Glen Rock. Shirley enjoyed playing cards and games with her friends, sometimes till early hours of the morning. She enjoyed getting together with her classmates from 1954, the birthday club gatherings and with all her numerous friends. But most of all, she looked forward to spending quality time with her family. Shirley and Gerald had four children, she leaves her three daughters, Cathy A. Grim and her husband Michael of Red Lion, Cindy S. Folmar and her husband William of Marietta and Christine D. Alwood of York. She was the loving grandmother to Amanda, Robert, Joshua and Cortney and great grandmother to five great grandchildren. She has four brothers, Lamar Glatfelter of Glen Rock, Timothy Glatfelter of Conway, SC, Stanley Glatfelter of York, and Thomas Glatfelter of Glen Rock, along with numerous nieces and nephews. She was preceded in death by her son Jeffrey L. Alwood on February 14, 1986 and her brother Barry Glatfelter. Viewing will be on Thursday, October 8th, from 9-10 am at Greenmount United Methodist Church, 4242 Greenmount Church Road, Glen Rock. A Graveside Service of Honor and Praise for Shirley will follow the viewing and will begin at 10 am at the Greenmount UM Church cemetery, with her pastor, Timothy Parker officiating. Burg Funeral Home, Inc., 134 W. Broadway, Red Lion, will be assisting the family with arrangements. As per our Governor, masks and social distancing will be observed with a limit of 25 people in the church at any given time. Please be considerate of those arriving after you, so that they may share time with the family as well. In lieu of flowers, contributions in memory of Shirley may be offered to her church, at the address listed above.

Shirley M. (Glatfelter) Alwood, closed her eyes, when her Savior called and went to her eternal home on Sunday, October 4, 2020, at 2:15 am at Manor Care South York, at the age of 83. She was the wife of the late Gerald C. Alwood, who entered... View Obituary & Service Information

The family of Shirley M. (Glatfelter) Alwood created this Life Tributes page to make it easy to share your memories.

Shirley M. (Glatfelter) Alwood, closed her eyes, when her Savior...

Send flowers to the Alwood family.