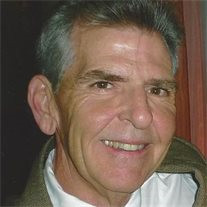 Stephen "Steve" M. Hughes of Red Lion went from life to life eternal after lengthy illness, on Sunday , January 22, 2017 at 6:30 am at Highlands Care Center in Laporte, PA with his wife and loving companion, Bo by his side at the age of 62. He was the loving husband of Terri L. (Stabley) Hughes to whom he married on January 15, 1994, celebrating 23 years together. Steve was born in Baltimore City on May 30, 1954 and was the son of the late John E. and Shirley V. (Sentz) Hughes. He was a Salesman for Multi Quip based in California. Steve was very good at his job and was well known by customers from Pennsylvania to Maine. Steve attended Bethany United Methodist Church in Red Lion and was a member of York Rifleman, Mt. Moriah Lodge Free and Accepted Masons # 116 in Towson, Maryland, Scottish Rite Freemasonry 32nd degree, National Rifle Association and the Susquehanna Valley GTO Club. He leaves to cherish his memory, his wife, Terri of Red Lion and his faithful companion (Shitsu), Bo. A brother, John E. Hughes, Jr. and his wife Ann of Churchville, MD. His sister, Amy B. Hughes and her companion, Evan L.J. Smith of Forrest Hill, MD. Two nieces, Christi L. Gambler and her husband Michael of Columbia and Jennifer A. Strayer and her husband Joseph of Wrightsville. A nephew, Russell E. Stabley,IV of Delta. Five great nieces and nephews, Caden Sieling, Parker Strayer, Addyson Strayer, Hunter Stabley and Tyler Stabley. Father in law, Russell E. Stabley Jr. of Red Lion and his brother in law, Russell D. Stabley of Millroy, PA. He was preceded in death by his mother in law, Doris (Tatlock) Stabley on January 23, 2015 and his great niece, Faith Strayer on April 14, 2006. Viewings will be on Thursday, January 26th from 7-9 pm and Friday, January 27th from 9:30 to 10:30 am at Burg Funeral Home, Inc., 134 W. Broadway, Red Lion. A Service of Honor and Praise for Steve will begin on Friday, at 10:30 am at the funeral home, with his pastor, Rev. Ronald L. Doverspike officiating. Burial will be at Red Lion Cemetery. Steve was a wonderful husband to Terri. He enjoyed the outdoors, shooting his guns and some hunting and going to the mountains in Sullivan County. He was enthused with muscle cars. He enjoyed working on GTO's and going to car shows. In lieu of flowers, contributions in Stephen's memory may be offered to: Alzheimer's Association GPA, 3544 N. Progress Ave., Suite 205, Harrisburg, PA 17110. Perhaps my time seemed all too brief. Don't lengthen it now with undue grief. Lift up your heart and Share with me, God wanted my now, HE SET ME FREE.

Stephen "Steve" M. Hughes of Red Lion went from life to life eternal after lengthy illness, on Sunday , January 22, 2017 at 6:30 am at Highlands Care Center in Laporte, PA with his wife and loving companion, Bo by his side at the age of 62.... View Obituary & Service Information

The family of Stephen "Steve" M. Hughes created this Life Tributes page to make it easy to share your memories.