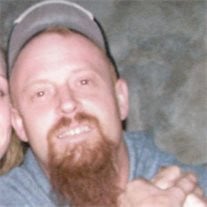 YORK Steven 'Red' Jay Gingerich, Sr., 35, entered into rest on Sunday, October 31, 2010, at 4 p.m. as a result of a motorcycle accident. He was the husband of Sarah M. (Brown) Gingerich, his high school sweetheart, who he married July 13, 1996. He was born in York on March 5, 1975, the son of Wendy S. (Christine) Gingerich of York and her companion, Paul L. Shipley, Sr. and the late Glenn 'Dean' E. Gingerich, who passed away approximately two and one half years ago. He worked for Hard Chrome Specialist of York for 7 1/2 years and then for Specialty Tree Services. Red then started his own business, S & S Construction in York. He grew up in the Manchester area and attended North Eastern Schools and Eastern School. He was an avid sportsman, as a young boy he played little league baseball in York Haven; as his family says 'he had a need for speed' and enjoyed dirt track racing, NASCAR (with his favorite driver being # 99 - Carl Edwards). He loved seeing the hot rods but his passion was for motorcycles. Steven also loved a wide variety of music from country to heavy metal. In addition to his wife , Sarah, and his mother, Wendy; he leaves one daughter, Lacey D. Gingerich at home; two sons, Noah D. Gingerich and Steven J. Gingerich, Jr., both at home; his beloved pets, Shelby and Zuki; paternal grandfather, Jay L. Gingerich of Hellam and wife, Kitty; a maternal grandmother, Evelyn Christine of Thomasville; numerous aunts, uncles and cousins; his very best friends who were like brothers to him, Barry Crowl of York and Brandon Ritz of Hellam; mother-in-law, Lorie Habel of Lancaster and husband, Marlin; and his four legged sisters, Lucy and Bella. He was preceded in death by his paternal grandmother, Thelma M. Gingerich in 1991; and a maternal grandfather, Richard D. Christine in 1998. Visitation will be held on Sunday, November 7, 2010, from 6 to 8 p.m. and Monday from 9 to 10 a.m. at Burg Funeral Home, Inc., 134 W. Broadway, Red Lion. Service will be Monday at 10 a.m. at the funeral home, with the Rev. David C. Powers, pastor of Columbia Presbyterian Church, officiating. Burial will be in Susquehanna Memorial Gardens. The family requests that in lieu of flowers, contributions be offered to the First Capital Federal Credit Union, 161 Kent Road, York, PA, in Stevens memory to provide for his three children in the future. Steven "Red", was a wonderful son, as well as husband and father. His family came first, he loved to sit and listen to his daughter Lacey play the guitar and enjoyed the time with his sons playing football. He will be dearly missed by all of his family and numerous friends. To honor Steven's father at his funeral service, Steven wore CAMO. It is the request of the family that those attending Red's service honor him the same way by wearing CAMO. "Our family chain is broken, and nothing seems the same, but as God calls us one by one, the chain will link again." All my love, Sarah. Memorial condolences can be made at www.BurgFuneralHome.com

The family of Steven "Red" Jay Gingerich, Sr. created this Life Tributes page to make it easy to share your memories.