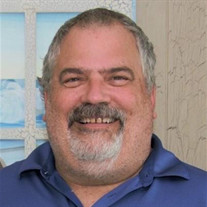 Steven Scott Rider, of “Bad Boy Blvd.”, in Red Lion, entered into rest on Sunday, February 16, 2020, at 6:12 pm, at the University Of Maryland Medical Center in Baltimore, after an industrial accident, at the age of 57. He was the husband of Tracy Ann (McKnight) Rider to whom he married on December 29, 2001, celebrating 18 years together. He was born in Red Lion, on November 16, 1962, and is the son of Glen R. and Patricia Ann (Hall) Rider of Red Lion. Steven was a graduate of the Red Lion High School, Class of 1981, and a United States Navy Veteran. He worked for Freedom Hoist and Crane for several years as a hoist and crane repair tech. He enjoyed riding motorcycles, hunting, his dog and spending time with his family. Steve was a practical joker and will be remembered for all the laughs he brought to those who knew him. Besides his wife, and parents, he leaves his only daughter, Nicole R. (Rider) Veseth and her husband Travis of York, along with his two brothers, Darryl Rider and Jenn of Dallastown, Robert Rider and Deb of Red Lion, aunts, uncles, nieces, nephews and cousins. He also leaves his mother in law, Connie Luckenbaugh of York, three brothers in law, Douglas McKnight of WVA, Mitchell McKnight of York, David McKnight and Jodi of York and his black Pomeranian, Bear. Viewing is scheduled for Sunday, February 23rd, from 6-8 pm and Monday, from 11:30 to 12:30 pm at Burg Funeral Home, Inc., 134 W. Broadway, Red Lion. A Service of Honor and Praise for Steven will begin at 12:30 pm at the funeral home, with his very dear friend, Pastor Brian Witmer officiating. Burial will be at Susquehanna Memorial Gardens, with full military rites offered by the York County Veterans Honor Guard. In lieu of flowers, the family has kindly asked that donations be offered to Burg Funeral Home, Inc., to assist with the unexpected finances incurred.

The family of Steven Scott Rider created this Life Tributes page to make it easy to share your memories.

Send flowers to the Rider family.