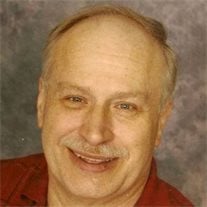 Steven "Steve" Wayne Brenneman went home to His Lord and Savior on Mon., Sept. 8, 2014, at 10:15 a.m. at Hospice and Community Care in Mt. Joy, after a lengthy illness at the age of 62. He was the husband of Vicki R. (McCleary) Brenneman of Red Lion. Steve was born in York on May 25, 1952, and was the son of the late Roland and Betty (Schrum) Brenneman. Steve worked at Johnson Controls as a machine operator, retiring after 42 years. He was a member of Red Lion Lodge #649 Free and Accepted Masons where he served as Past Master in 2002; and he was a member of Hawks Gunning Club for many years serving on the board of directors. He was an avid Penn State fan and loved going camping and building campfires. His favorite food was hard shell crabs. Steve is survived by his wife, Vicki; a daughter, Melissa J. Robinson of York; a son, Ted A. Flinchbaugh of Felton and his wife Lisa; two grandchildren, Nicole J. Robinson of York and Timothy A. Flinchbaugh of Felton; a sister and brother-in-law, Marvel and Gary Burg of Dover; two cousins, Mil Peiffer and Leticia "Boots" Boring, both of York; his working Buddy, "Wag"; and nieces and nephews. Nicole is expecting with Steve's first great-grandbaby, due in February. There will be no viewing. Cremation will take place with Burg Funeral Home, Inc., 134 W. Broadway. A Service of Honor and Praise for Steve will be held at a later date. Burial will be in Mt. Rose Cemetery at the convenience of the family. In lieu of flowers, contributions may be offered to: Cancer Patient Help Fund, York Health Foundation, 50 N. Duke St., Second Floor, York, PA 17401; or to Hospice & Community Care, 685 Good Drive, P.O. Box 4125, Lancaster, PA 17604-4125; or the ASPCA-"In Memory of Steven Brenneman", P.O. Box 96929, Washington, D.C . 20090-6929. Steve was a wonderful husband to Vicki to whom he married on Dec. 16, 1994, celebrating 20 years together. She and his family were his world and they always came first in his life. Playing miniature golf with his grandchildren was always a great time. A very special thank you to his doctors, York Hospital nurses, Hospice & Community Care caregivers and especially to George. Steve was grateful to his wife, children, grandchildren and his many friends for all of their love shown to him and prayers during his illness and this difficult time. He will be sadly missed by all who knew and loved him. Steve wants to be remembered with JOY and LAUGHTER! Now that he has been set free from all the pain, he awaits for us, in God's house, with open arms, a big smile and a big HUG!!

Steven "Steve" Wayne Brenneman went home to His Lord and Savior on Mon., Sept. 8, 2014, at 10:15 a.m. at Hospice and Community Care in Mt. Joy, after a lengthy illness at the age of 62. He was the husband of Vicki R. (McCleary) Brenneman of... View Obituary & Service Information

The family of Steven Wayne Brenneman created this Life Tributes page to make it easy to share your memories.