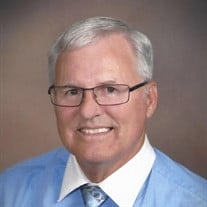 Terry W. Mee, 71, of Red Lion, PA, passed into glory at his residence, with his loving wife by his side, at 7:55 am on Monday, August 5, 2019 at the age of 71. He was the husband of Valerie J. (Anderson) Mee to whom he married on August 26, 1967, celebrating 51 years together. Terry was born in Jamestown, NY on October 25, 1947 and is the son of Betty L. (McCall) Mee of Falconer, NY, and the late Warren C. Mee who preceded Terry in death, in February, 1991. He graduated from Falconer Central High School in 1966 and Alfred University in 1970 with a degree in Ceramic Engineering. All through his school years he excelled in football, track, basketball and baseball. After college Terry worked for Monofrax Refractories in Falconer NY until being drafted into the Army in October 1970. His tour in Vietnam was spent as an Air Operation Specialist and Intelligence Analyst. He received the Bronze Star for Meritorious Achievement in Ground Operations Against Hostile Forces. He also received the National Defense Service Award, Vietnam Service Medal with Two Stars and the Vietnam Campaign Medal w/60 Device. After being discharged from the Army, Terry worked five years for Freeport Brick Co., Freeport, PA as an engineer. He became Plant Manager in 1976 for Drexel Refractories in Carrollton, OH. From 1979 to 2011 he was a Senior Project Manager of Magnesita Refractories (J.E. Baker Co.) in York, PA . Terry was a member of the Keramos Professional Fraternity, the American Ceramic Society, Gideon’s International, and the York Archery Club where he helped with their Junior Olympic Archery Program. Terry enjoyed coaching Little League when his sons were young. As a member of The Rocky Mountain Elk Foundation, he enjoyed hunting elk in the Rocky Mountains with his bow and as well as deer here at home. His love for the Lord led him into many service areas starting in the early 1970’s and included a Jail Ministry in Ohio. Terry was actively involved in the Winterstown United Methodist Church where he was a Youth Leader for 12 years, Lay Leader, Lay Speaker, taught Sunday School, and held many positions over the years. He was also active in the York District committee for Lay Speaking and taught the Basic Lay Speaking course for eight years. The greatest love of Terry’s life was his family. He enjoyed outdoor and indoor games together, taking his children back to grandparents’ farms and attending their sporting events. During later years it was a blessing to travel with his wife, Valerie. Surviving are: his wife Valerie; three children, Tracy and his wife Amy Mee of Allison Park, PA, Rodney and his wife Heather Mee of Wellsboro, PA and Coleen and her husband Jason Butler of Wellsboro, PA; nine grandchildren, Tracy Michael Mee (Juliana), Rachel Mee, Evan Mee, Sarah Mee, Natalie Mee, Russell Mee, Case Butler, Cole Butler and Violet Butler, three brothers, Ory (Pat) Mee of Hilton, NY, Larry (Joyce) Mee and Alan (Kathy) Mee of Falconer, NY; two sisters, Greta Crowell and Phoebe (Bob) Grow of Farmington, NY and his mother, Betty L. Mee of Falconer, NY. Viewing will be on Thursday, August 8th, from 12:30 to 2 pm at Winterstown United Methodist Church, 12184 Winterstown Road. A Service of Honor and Praise for Terry will begin at 2 pm, at the church, with his pastor, Rev. David K. Shultz, officiating. Burg Funeral Home, Inc., 134 W. Broadway Red Lion will be assisting the family with the arrangements. Burial will take place in Myrtle Cemetery in Chautauqua County, NY, at the convenience to the family. In lieu of flowers, contributions may be offered to Winterstown United Methodist Church, 12184 Winterstown Road, Felton, PA 17322 www.BurgFuneralHome.com

The family of Terry W. Mee created this Life Tributes page to make it easy to share your memories.

Send flowers to the Mee family.