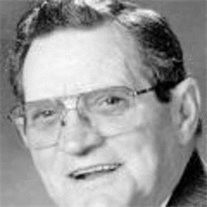 Thad H. Harbaugh, 81, formerly of Red Lion, entered into rest after a brief illness at 9:30 a.m. Saturday, July 10, 2010, at Country Meadows of Leader Heights, York. He was the husband of Flo B. (Kinard) Harbaugh, who entered into rest on May 5, 2003. He was born in York, on January 2, 1929, and was the son of the late Norman L. and Alcasta M. (Sprenkle) Harbaugh. Mr. Harbaugh was a truck driver for Miller Motor Freight in York, Triple A. Trucking in York, and for Markey Trucking in Dallastown, for a total of more than 34 years of service. He then helped his son at Security Fence Company in Red Lion and retired from there on January 1, 2010. Before driving trucks, Thad was a self employed horse trainer. He and his late wife, Flo, were the state champions of five gaited horses in Maryland. He was a member of the Teamsters Local #430 and 771, serving on the executive board for six years and as a steward for 15 years. He was also a member of the Viking Club, Hawks Gunning Club, and the South End Democratic Club, and a longtime member of St. Paul's United Methodist Church in Red Lion. Surviving are two sons, Dr. Robert E. Harbaugh of Hummelstown and his wife, Dr. Kimberly, and Thomas D. Harbaugh of Red Lion and his wife, Judy; seven grandchildren; two stepgrandchildren; five step great-grandchildren; and several nieces and nephews. He was preceded in death by two brothers, Arthur "Russ" Harbaugh and Ernest Harbaugh; and a sister, Cathryn Tracey. His grandson Luke T. Harbaugh, who is attending Duke School of Divinity, will officiate the service. Burial will be at Salem Community Cemetery near Martinsville. Contributions may be offered to York VNA Hospice, 504 S. George St., York, PA 17403. Thad was a very faithful and loving companion to his wife, Flo for 56 years. He was a friend to everyone he met and will be sadly missed by all who knew him. The family would like to extend a sincere thank you and appreciation for the wonderful care given to Thad and the compassion extended to them during his brief illness from the staff at Country Meadows and the York VNA Hospice.

Thad H. Harbaugh, 81, formerly of Red Lion, entered into rest after a brief illness at 9:30 a.m. Saturday, July 10, 2010, at Country Meadows of Leader Heights, York. He was the husband of Flo B. (Kinard) Harbaugh, who entered into rest on May... View Obituary & Service Information

The family of Thad H. Haraugh created this Life Tributes page to make it easy to share your memories.

Send flowers to the Haraugh family.