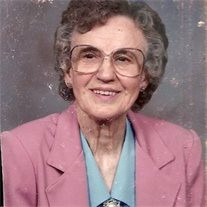 Thelma E. (Bolton) Measley formerly of Shrewsbury entered into eternal rest on Thurs., January 21, 2016 at 9:36AM at Manor Care South at the age of 93. She was the wife of the late Roy O. Measley whom entered into eternal rest July 6, 1983. Thelma was born in Red Hill, Virginia on July 25, 1922 and is the daughter of the late James M. and Luecretia (Berry) Bolton. Thelma graduated from Keeney's High School in New Freedom. She worked at Tyco, formerly AMP (American Marine Products) as a machine operator in the electronic department. She attended Turnpike Baptist Church for many years; and liked to attend Stewartstown Senior Center. She leaves behind to cherish her memory, her two sons, Roy J. Measley and his wife, Sandy of Colora, MD and Alvin R. Measley and his wife, Joyce of Stewartstown; five grandchildren; ten great grandchildren; eleven great great grandchildren; and numerous nieces and nephews. She was preceded in death by her two brothers and nine sisters. There will be a viewing Tues, January 26, 2016 from 6-7 pm at Burg Funeral Home, Inc., 134 W. Broadway, Red Lion. A Service of Honor and Praise for Thelma will begin at 7 pm at the funeral home with Rev. Margaret Stevens, Chaplain of Heartland Hospice Care in York will officiating. Burial will be private and at the convenience of the family in Christ Evangelical Lutheran Cemetery in Shrewsbury. In Lieu of flowers, contributions may be offered to: Manor Care South; 200 Pauline Dr., York PA, 17402. Thelma's family would like to extend a sincere thank you to the staff of Manor Care South and Heartland Hospice Care for all the personal attention and care given to Thelma during her stay. Thlema was a loving mother and grandmother who adored spending time and taking care of her grandchildren and family. She liked cooking and baking. But what she really enjoyed was dancing and listening to southern country music, she was dancing at Manor Care when she able. She will be greatly missed by all who knew and loved her. Perhaps my time seemed all too brief. Don't lengthen it now with undue grief. Lift up your heart and share with me, God wanted me now; He set me free. Dancing in Heaven!

The family of Thelma E. (Bolton) Measley created this Life Tributes page to make it easy to share your memories.