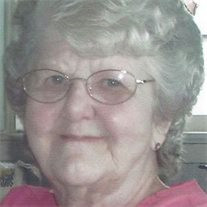 Thelma E. (Winters) Raab, formerly of Dallastown, entered into eternal rest on Sunday, December 10, 2017 at 1:53 a.m. at Manor Care South at the age of 93. She was the wife of the late John P. Raab II who entered into rest on December 22, 2007. She was born on July 4, 1924 and was the daughter of the late Ervin and Bessie (Brown) Winters. Thelma worked at the former Flinchbaugh Products, retiring in 1988 after several years of service. She was a longtime member of St. Paul's (Chapel) United Methodist Church in Red Lion where she was active in cooking for the church picnics. Thelma was the loving mother of four sons, Larry A. Raab and his wife, Joan E. of Harrisburg, John P. Raab III and his wife, Jayne of York, Dennis E. Raab and his wife, Cheryl A. of York and Douglas Q Raab of York. She was a doting grandmother to her 10 grandchildren; and 21 great grandchildren; and a grandson, Bryan P. Webb; and to her numerous nieces and nephews. She was preceded in death by a daughter in law, Roxanne Raab who entered into rest on January 16, 2016 and by her nine siblings. Thelma enjoyed traveling with her late husband. Every Friday her sisters would gather at Thelma's house and she would do their hair as the chatted about recent events. She was a very kind and giving person and would even give things to people she did not know. She will be sadly missed by all who knew and loved her. Until we meet again, you will be forever in our hearts. Viewing will be on Friday, December 15 from 6 to 7 p.m. at Burg Funeral Home, Inc., 134 W. Broadway, Red Lion. A Service of Honor and Praise for Thelma will begin at 7 p.m. with her pastor, the Rev. Brendon L. Hock officiating. Burial will be private and at the convenience of the family in Red Lion Cemetery. In lieu of flowers, contributions may be offered to the Alzheimer's Association, GPA, 3544 N. Progress Ave, Suite 205, Harrisburg, PA 17110.

The family of Thelma E. (Winters) Raab created this Life Tributes page to make it easy to share your memories.