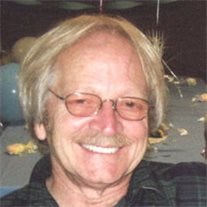 Theodore “Ted” Duaine Boyd age 62, of Shrewsbury passed away on Friday June 4th, 2010 at 10:52 pm at the York Hospital. Born on August 21, 1947 in Coalinga, CA he is the son of the late Theodore and Lena (Boldjack) Boyd. Ted was an optician for Pearle Vision Centers for over 21 years and also worked for the York County Newspaper. He was a US Army Veteran who served during the Vietnam War. Ted was also an avid NASCAR fan. He is survived by his wife of 38 years Dorothy (League) Boyd who he married on March 17, 1972. He is also survived by his children David League and his wife Mandy of Hellam, Timothy League of Shrewsbury, Christopher Boyd and his wife Nancy of Shrewsbury, Daniel Boyd and his wife Kimberly of Craley, Kim Boyd of York, Jennifer Weisheit of Shrewsbury and Corey Boyd of home. He will be missed by his 10 grandchildren, Ryan, Sabrina, Skyler, Hunter, Jade, Jayla, Josiah, David Jr., Karley and Noah. He is also survived by his brother, Tommy Boyd of MD; his sisters, Joy Swain and husband Jimmy of WV, Hope Mause of MD and Connie Smith of WV; and many nieces and nephews. Family and friends are invited to his viewing on Wednesday, June 9th, from 6-8 pm and Thursday, June 10th from 9-10 am at the Burg Funeral Home Inc. 134 West Broadway in Red Lion. Funeral service to begin at 10 am on Thursday with Pastors Thomas and Judy Sawmiller presiding. His interment will follow will full military honors by the York County Honor Guard at Joseph Giesey Memorial Cemetery, Shrewsbury. In lieu of flowers donation are requested to be made to his memorial fund c/o First Capital Credit Union 161 Kent Road York, PA 17402

The family of Theodore "Ted" Duaine Boyd created this Life Tributes page to make it easy to share your memories.