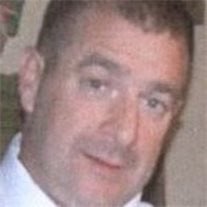 BROGUE Thomas W. "Tommy" McLearnon, 42, entered into rest unexpectedly at 5:30 p.m. Monday, February 7, 2011, at his residence. He was the husband of Carrie R. (Knox) McLearnon whom he married October 27, 2000. He was born in Philadelphia, on August 18, 1968, and was the son of the late Raymond E. and Shirley Ann (Gradwohl) McLearnon. Mr. McLearnon was the Director of Environmental Services at Thornwald Home. In addition to his wife, Carrie, he is survived by one son, Thomas J. McLearnon; three daughters, Autumn R. McLearnon, Brielle E. McLearnon, and Alaina J. McLearnon, all of Brogue; two brothers, Michael J. McLearnon and wife, Patricia of Glenside, and Raymond E. McLearnon, Jr. and wife, Kathleen of Warrington; four sisters, Joanne M. Glenn and husband, John of Hatfield, Patricia E. Roynan and husband, Walter H. of North Wales, Debra A. Deegan and husband, Robert of King of Prussia, and Theresa M. Bennett and husband, Stephen of Oreland; 20 nieces and nephews; 10 great-nieces and nephews; and father-in-law, Raymond L. Knox and wife, Bonnie of Washington, Pa. He was preceded in death by his mother-in-law, Betty Ann Knox. There will be no viewing. Cremation will take place with Burg Funeral Home, Inc., 134 W. Broadway, Red Lion. Family and friends are invited to extend their condolences on Saturday from 9 to 10 a.m. at St. Paul's U.M. Church, 45 First Ave., Red Lion. A memorial service to celebrate Tommy's life will begin at 10 a.m. Saturday at the church. The Rev. Dr. Charles W. Salisbury, pastor of St. Paul's U.M. Church, assisted by the Rev. Michael Mitchell, assistant pastor of Bethany U.M. Church, both of Red Lion, will officiate. Burial will be private and at the convenience of the family. It is the wish of the family that in lieu of flowers, contributions be offered and payable to the "Thomas McLearnon Memorial Fund", c/o; People's Bank, 2510 Delta Road, Brogue, PA 17309 for the benefit of his children. A donation can also be offered at any People's Bank Branch. Tommy was a Volkswagen enthusiast and loved anything that had to do with being outdoors. But there was nothing more important to him than his wife and his children and family. Memorial condolences can be made at

BROGUE Thomas W. "Tommy" McLearnon, 42, entered into rest unexpectedly at 5:30 p.m. Monday, February 7, 2011, at his residence. He was the husband of Carrie R. (Knox) McLearnon whom he married October 27, 2000. He was born in Philadelphia, on... View Obituary & Service Information

The family of Thomas "Tommy" McLearnon created this Life Tributes page to make it easy to share your memories.