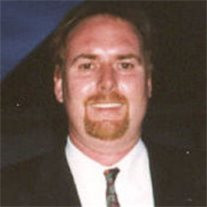 FELTON Todd G. Grove, 46, entered into rest unexpectedly at 4:49 p.m. Tuesday, November 30, 2010, at York Hospital. He was the husband of Stacia (Hoffman) Grove, whom he married September 7, 1991. He was born in York, on November 2, 1964, and was the son of Treva A. (Grim) Grove and stepfather, Gary E. Ginter, both of Red Lion, and his late father, Thomas G. Grove. Mr. Grove was a Sales and Production Manager at Monarch Products, were he worked since 1981. He was a member of Bethlehem United Methodist Church in Dallastown, where he formerly played on the Bethlehem U.M. Softball (BUMS) Team. He was an avid hunter and outdoorsman who was a member of the High Mount Hunting Club in Renovo. In addition to his wife, mother, and stepfather, he is survived by one daughter, Rachel B. Grove of Felton; one son, Mitchell G. Grove of Felton; one sister, Traci A. Grove of Red Lion; stepmother, Chris Grove of Harrisburg; two half sisters, Michelle Bonsick and Nicole Grove; nieces and nephews; an aunt; and an uncle. There will be a viewing from 6 to 8 p.m. Sunday, December 5, at Burg Funeral Home, Inc., 134 W. Broadway, Red Lion, and from 9 to 10 a.m. Monday at Bethlehem U.M. Church, 109 E. Main St., Dallastown. The service will begin at 10 a.m. Monday at the church with his pastor, the Rev. Roger H. Mentzer, officiating. Burial will be private and at the convenience of the family. In lieu of flowers, contributions may be offered to a College Fund for his children, Rachel and Mitchell, c/o M&T Bank, 900 Country Club Road, Red Lion, PA 17356. Todd was a friend to everyone he knew. He was a wonderful husband to Stacia for 19 years and a great Dad to Rachel and Mitchell, with whom he was also an avid soccer Dad and coach. He will be greatly missed by all of his family and many friends.

The family of Todd G. Grove created this Life Tributes page to make it easy to share your memories.

Send flowers to the Grove family.