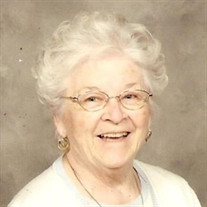 Treva Mae (Grim) Blouse, went from this life to life eternal on Wednesday, December 2, 2020, at 4:08 pm at Victorian Villa Personal Care Center in Dallastown at the age of 91. She was the wife of the late Weldon W. Blouse, who entered into rest on July 8, 2004. They were married on February 28, 1948, celebrating 56 years together, prior to his passing. Treva was born in Dallastown, on July 17, 1929 and was the daughter of the late Ralph A. and Bessie E. (Grove) Grim. She graduated from Dallastown High School, Class of 1947. She worked for the Red Lion School District as a cafeteria manager for 24 years prior to her retirement in 1991. She was a member of Bethlehem (Stonepile) United Methodist Church, in Red Lion for over 72 years and prior to her marriage, she was a member of St. John’s Blymire UCC in Dallastown. Treva was a cub scout den leader for her son’s cub pack #3 in Red Lion and volunteered with her church and her children’s activities. She was the happiest when surrounded by her family; she was a great cook and baker and was a true care giver always looking out for others above herself. She also loved spending time at the family’s cabin in Potter County, Camp Big Hollow. Treva and Weldon raised four children together: Jerry W. Blouse of Sun City Center, FL, Jan M. Blouse of Red Lion and his companion, Linda, and Janis L. Grimm of Red Lion and her husband Terryl and she was preceded in death by a son James W. Blouse who entered into rest June 6, 2017. She was the loving grandmother of Brenton (Christine) Blouse,Michael Blouse, Dirk (Katie), Derek (Holly) and Dustin (Hannah) Grimm and step grandmother to Michelle Hunt-Potter. She was also the great grandmother to Paige and Ian Blouse and Katelyn, Carson and Wellsley Grimm and step geat grandmother to Madison Potter. Treva also has three sisters: Fae Roth, Flo Hoffman and Phylis Seitz, and numerous nieces and nephews. She was predeceased by three brothers, Glenwood, Quentin and Hillard Grim and two sisters Erma Tyson and Hilda Eyster. The family would like to extend a heartfelt thank you to the staff of Victorian Villa for the wonderful care they provided for the nine years that she resided with them. Viewing will be on Wednesday, December 9th, from 6-8 pm at Burg Funeral Home, Inc., 134 W. Broadway, Red Lion, and Thursday, December 10th, from 10-11 am at Bethlehem Stonepile United Methodist Church, 250 Bethlehem Church Road, Red Lion. A Service of Honor and Praise for Treva will begin at 11 am at the church with her pastors, Larry Parlett and, William Jones, officiating. Burial will follow the service in the church cemetery. It has been requested by the governor, to wear a mask and observe social distancing when in doors, as much as possible. www.BurgFuneralHome.com

Treva Mae (Grim) Blouse, went from this life to life eternal on Wednesday, December 2, 2020, at 4:08 pm at Victorian Villa Personal Care Center in Dallastown at the age of 91. She was the wife of the late Weldon W. Blouse, who entered into... View Obituary & Service Information

The family of Treva Mae (Grim) Blouse created this Life Tributes page to make it easy to share your memories.

Send flowers to the Blouse family.