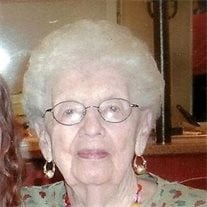 Treva S. (Reisinger) Snyder Burg, 94, entered into rest on Saturday, August 4, 2012, at 5 p.m. at Country Meadows Nursing Home. She was the wife of Philip W. Burg who entered into rest on November 18, 2006, and Herrman P. Snyder who entered into rest in 1955. She was born in Craley on November 16, 1917, and was the daughter of the late Benjamin H. and Henrietta (Neff) Reisinger. She was a cigar maker working at the former Frutiger's Cigar Company in Red Lion, then she worked at the Red Lion Cabinet Company and retired after many years of service working at the Red Lion Junior High School cafeteria. Treva was a longtime member of St. Paul's U.M. Church in Red Lion. Surviving are two daughters, Charmaine E. Waltemyer of York and husband, Charles E. and Susan C. Burg of York and husband, (Stephen); three grandchildren, Michael Waltemyer of York, Michelle Snyder of Lake Havasu, Ariz., and Erin A. Burg of York; three great-grandchildren; two great-great-grandchildren; and nieces and nephews. She was preceded in death by two sisters and one brother. There will be no viewing. Family and friends are invited to extended their condolences on Wednesday from 9:30 to 10:30 a.m. at Burg Funeral Home, Inc., 134 W. Broadway, Red Lion. The service will begin at 10:30 a.m. with the Rev. Stephany S. Sechrist, pastor at St. Paul's U.M. Church, Red Lion officiating. Burial will be in Red Lion Cemetery. In Lieu of flowers, contributions may be offered to Heartland Hospice, 3417 C. Concord Road, York, PA 17402. Treva's family was very important to her and she enjoyed all the times they spent together. She will be sadly missed by many who knew and loved her. Online condolences may be offered at www.BurgFuneralHome.com

The family of Treva S. Burg created this Life Tributes page to make it easy to share your memories.

Send flowers to the Burg family.