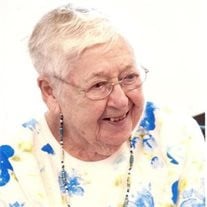 Verna L. (Glatfelter) Gable entered into eternal rest on Monday, Dec. 14, 2015, at 8:35 p.m. at SpiritTrust Lutheran Home Village at Sprenkle Drive at the age of 94. She was the wife of the late Ralph W. E. Gable who entered into rest on Feb. 24, 2006 and with whom she was married for 64 years. She was born and raised in York on September 29, 1921, and was the daughter of the late Oscar J. and Annie M. (Hoffman) Glatfelter. Verna was a Teacher's Aide at York Township Elementary School in earlier years and then worked in the meat department at both the former Conrad's Deli in York and at Safeway where she retired. She was a charter member of Aldersgate United Methodist Church in York where she worked in the kitchen and in later years would help by making calls to members to assist with luncheons; a 62-year member of Rainbow Chapter #517 Order of the Eastern Star in Red Lion where she was very active serving in various positions throughout the years; and a graduate of the Dallastown High School Class of 1939. She and Ralph also were Clowns with the Scottish Rite. Verna was known as "Lucky" the clown and Ralph was "Clover" the clown. Both she and Ralph also were volunteers at the York Fair for many years. Surviving her are daughter, Sandra G. Sassaman and Greg Peterson, both of Milwaukie, Ore.; two sons, Rev. Dr. Dennis and his wife Rev. Patricia Gable of Dover, and Dean and wife Vonnie Gable of Jacobus; eight grandchildren; 12 great-grandchildren; one great-great-granddaughter; and numerous nieces and nephews. She was preceded in death by her seven siblings. A Viewing will be held Thursday, Dec. 17 from 6 to 8 p.m. at Burg Funeral Home, Inc., 134 W. Broadway, Red Lion, with a service presented by Rainbow Chapter #517, OES beginning at 7:45 p.m. And then on Friday, Dec. 18 from 10 to 11 a.m. at Aldersgate United Methodist Church, 397 Tyler Run Road, York, PA 17403. A Service of Honor and Praise for Verna will be on Friday, Dec. 18 at 11 a.m. at the church. The Rev. Stephanie S. Sechrist, retired United Methodist pastor, will officiate. Burial will be in Salem Union Cemetery in Jacobus.In lieu of flowers, contributions may be offered to Aldersgate UM Church, 397 Tyler Run Road, York, PA 17403; or the Rainbow Chapter OES, Scholarships, c/o Pamela Kilgore, Secr,, 447 McCalls Ferry Road, Airville, PA 17302. Verna was a very sweet and kind lady. She loved knitting, baking cookies, tending to her flowers and herb gardens. But more importantly, she loved being with family and telling stories. In 1960, the family took a road trip out West and back. Every gathering always included fond and special memories of that adventure. Online condolences may be offered at:BurgFuneralHome.com

Verna L. (Glatfelter) Gable entered into eternal rest on Monday, Dec. 14, 2015, at 8:35 p.m. at SpiritTrust Lutheran Home Village at Sprenkle Drive at the age of 94. She was the wife of the late Ralph W. E. Gable who entered into rest on Feb.... View Obituary & Service Information

The family of Verna L. (Glatfelter) Gable created this Life Tributes page to make it easy to share your memories.