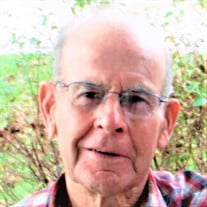 Vernard “Nard” W. Bacon, 92, of Red Lion, left his earthly life to enter eternal life with his Lord and Savior on Wednesday, August 4, 2021, at his residence. He was the husband of Doris Jean (Brown) Bacon, with whom he shared 66 years of marriage prior to her passing on January 21, 2015. Nard was born in Chanceford Township on September 6, 1928, and was the son of the late Wilson C. and Carrie R. (Taylor) Bacon. He was a lifelong farmer and drove bus for the Red Lion Bus Company, retiring after 50 plus years of service. He also formerly served on the Red Lion School Board. Nard loved baseball and played for various teams throughout the years. He was active in the Susquehanna League, where he played primarily for Conrads and was also a former Conrads manager. He was proud to be a member of the Susquehanna League Hall of Fame. In his later years, Nard was a member of the York County Oldtimers Baseball League. Nard loved music, especially country music. Along with his brother-in-law and some friends, Nard was in a band called the “Foxy Dudes” where he played guitar and sang. He also had thoroughbred horses that he raced at Penn National Race Track among other places. Nard was an avid hunter and loved to go on hunting trips to the mountains and to Canada. He was a member of the York County Fox Hunters Association and raised foxhounds for many years. He was also a member of the Fiddlers Association. Nard enjoyed going on bus trip vacations, with a few of his favorite locations being Wheeling, WV, Gatlinburg, TN, and Branson, MO. He was a lifetime member of St. James Lutheran Church in Brogue. Nard was a friend to everyone whether he knew you for many years or was just meeting you for the first time. He will be greatly missed by all. Nard and Doris had three sons: Michael V. Bacon and his wife, Janet, of Land O Lakes, FL; Marlyn L. Bacon and his wife, Cindy, of Red Lion; and Wayne E. Bacon and his wife, Cindy, of Wellsboro. He was the loving grandfather to six grandchildren: Jennifer Bacon, Douglas Bacon, Melanie Porter, Anne Thompson and Rebecca Pierpont, Brent Bacon and eight great grandchildren. He was one of five children and is survived by siblings Lois Taylor of Dallastown, David Bacon and wife Carolyn of Dallastown, and Ada McManus and husband Peter of Maryland. He is also survived by his brother-in-law Frank Warner, Jr., of Brogue, along with numerous nieces and nephews. He was preceded in death by a grandson, Derek Bacon, two great grandchildren, Blake Thompson and Gabriella Thompson, his sister, Nelda Warner and brother in law, Jack Taylor. Viewings will be on Thursday, August 12th, from 6 to 8 pm at Burg Funeral Home, Inc., 134 W. Broadway, Red Lion and Friday, August 13th, from 10 to 11 am at St. James Lutheran Church, 2355 Cramer Road, Brogue, PA. A Service to Honor and Praise Nard’s life will begin at 11 am at the church. His pastor, Rev. Kathy A. Kuehl and his cousin, Pastor Lanny D. Kilgore, will officiate at the service. Burial will follow the service at the church cemetery. It is not required to wear a mask, but if you feel more comfortable wearing one, please do. In lieu of flowers, contributions may be offered to: New Bridgeville Memorial Fire Company, 2870 Furnace Road, Red Lion, PA 17356. Online condolences may be offered: www.BurgFuneralHome.com

The family of Vernard W. Bacon created this Life Tributes page to make it easy to share your memories.

Send flowers to the Bacon family.