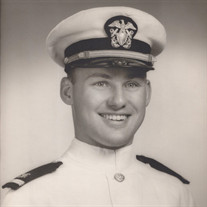 Victor Trautwein, Jr., of Portsmouth, RI, passed away on June 26, 2019, at Hartford Hospital in Hartford, CT, with his family at his side, after a brief illness. He was 88 years old. Vic (as he was commonly known) was born September 28, 1930, in Chicago, IL, to the late Victor and Charlotte (Marquet) Trautwein. He graduated from Dartmouth College in 1952 and from the Tuck School of Business in 1953. He served as a lieutenant in the United States Navy from 1953 to 1956, during the Korean War. Following his honorable discharge, he went to work for R.R. Donnelly and Sons, starting in Lancaster, PA and then returning to Chicago, where he rose to the post of financial director of their book group. He retired in 1992. While in Lancaster he met and married the late Joanne Murphy Trautwein (1934-1991). He is survived by their two children: their son Victor Trautwein III and his wife, Leslie, of the Dominican Republic, and their daughter Carrie Louise Trautwein Hammond and her husband, Jonathan, of Farmington, CT. He is also survived by 6 grandchildren, as well as by his sister, Sandra Trautwein MacGregor, of Glastonbury, CT. His second wife, the late Virginia Wright Trautwein, to whom he was married for 19 years, passed away in 2017. Vic was a fun-loving, generous, and adventurous man of many talents. A lifetime athlete, he played baseball, hockey, and badminton as a youth and young adult, and then, tennis and golf well into his later years. As an active alumnus of Dartmouth, he participated in both fundraising and class events from graduation until his death. He was also a passionate musician, most recently playing French horn in the Newport, RI Community Band and singing in the choir of the United Congregational Church in Middletown, RI. Central to his life, Vic’s faith was evident in word and deed. He was an active member of a Christian church wherever he lived, including Northminster Presbyterian Church in Evanston, IL for over 30 years and UCC in Portsmouth for almost 20 years. Finally, he was a dedicated husband and father who greatly valued relationships and imparted a sense of fairness, responsibility, discipline, and adventure to everyone in his path. A Memorial Service to Honor and Praise Vic, will be held on August 9th, 2019, at 11 am at the United Congregational Church, 524 Valley Rd., Middletown, RI. A second Memorial Service will be held on Saturday, August 10th, 2019, at New Harmony Presbyterian Church, 2295 Delta Rd, Brogue, PA, at 3 pm, with Pastor Beth Appell officiating. Visitation will be on Saturday, from 2-3 pm at the church. Burial will be in New Harmony Presbyterian Cemetery with full military rites offered by the York County Veterans Honor Guard. Burg Funeral Home, Inc., 134 W. Broadway, Red Lion, will be assisting with the local arrangements. In lieu of flowers, memorial contributions may be made to the Aquidneck Land Trust, 790 Aquidneck Avenue, Middletown, RI 02842 or to Kids Alive International, 2507 Cumberland Drive, Valparaiso, IN 46383. Donations to Kids Alive will be used to buy books for impoverished children--something dear to Vic’s heart, which he supported for years.

Victor Trautwein, Jr., of Portsmouth, RI, passed away on June 26, 2019, at Hartford Hospital in Hartford, CT, with his family at his side, after a brief illness. He was 88 years old. Vic (as he was commonly known) was born September 28, 1930,... View Obituary & Service Information

The family of Victor Trautwein Jr. created this Life Tributes page to make it easy to share your memories.

Victor Trautwein, Jr., of Portsmouth, RI, passed away on June...

Send flowers to the Trautwein family.