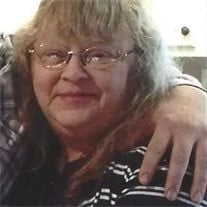 Virginia Lou Mitzel York Virginia Lou (Starner) Mitzel entered into eternal rest on Monday, May 9, 2016 at her residence at the age of 64. She was the wife of Warren C. Mitzel of York. Virginia was born in York on May 15, 1951 and was the daughter of the late Joseph A. Starner and Betty Jane (Taylor) Hoskin. Virginia was a homemaker for most of her life, she also worked at Hill Restaurant and at the York Galleria Mall. Survivors besides her husband, Warren, include four children, Vincent Lee Starner and his wife, Teresa Lyn Starner, Richard Shonn Starner, Jenny Lou Mitzel, Carl Warren Mitzel, Sr.; 13 grandchildren, Cody Michael Starner, Kayla Marie Starner, Katelyn Starner, Cory A. Keihl, Hailee E. Keihl, Sheena Potts, Mya Jasmine Temple, Whitney Elizabeth Temple, Destiny Summer Johnson, Deandre Develle Johnson, Carl Warren Mitzel, Jr., Aiden Alexander Mitzel, Tyler Alan Mitzel; one great- grandchild, Brooklyn Alexis Washington; two brothers, Terry Lee Hoskin and his fiancé, Lorie Ann Whittaker and David Taylor; step children, Shane, Alicia, Kyle and Rikki Jackson; aunts, Dolores Robinson and Gloria Mae Simmons; numerous nieces, nephews, cousins and other family members. There will be a viewing on Monday, May 16, from 6 to 7 p.m. at Burg Funeral Home, Inc., 134 W. Broadway, Red Lion. A Service of Honor and Praise for Virginia will begin on Monday at 7 p.m. at the funeral home. The Rev. Mitchell M. Galloway, pastor of Winterstown United Methodist Church, will officiate. A Graveside Service of Honor and Praise will be on Tuesday, May 17 at 1 p.m. at Susquehanna Memorial Gardens. If attending, please meet at the cemetery at 12:45 p.m. In Lieu of flowers, the family has kindly requested that, in memory of Virginia, contributions be offered to the funeral home to assist them at this difficult time. Virginia and Warren were married on March 31, 1979, celebrating 37 years together. Virginia was a loving mother who adored taking care of all her children and spending time with her grandchildren. She was an avid Bingo player, who liked to play the lottery, and enjoyed doing puzzles, sewing, and watching soap operas, especially, "Days of Our Lives." Virginia was a very creative woman and could always make you smile, with her singing and dancing. We love you mom, you will forever be in our hearts, Rest in Peace - Your loving family.

Virginia Lou Mitzel York Virginia Lou (Starner) Mitzel entered into eternal rest on Monday, May 9, 2016 at her residence at the age of 64. She was the wife of Warren C. Mitzel of York. Virginia was born in York on May 15, 1951 and was the daughter... View Obituary & Service Information

The family of Virginia Lou Mitzel created this Life Tributes page to make it easy to share your memories.

Send flowers to the Mitzel family.