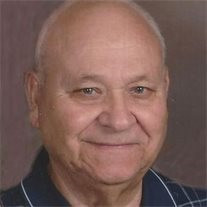 W. Kenneth "Kenny" Seitz went home to be with his Lord and Savior after a brief illness, with his loving wife, Geraldine "Gerry" V. (Rineholt) Seitz, by his side, on Friday, October 7, 2016 at 9 p.m. at his residence at the age of 82. Kenny was born in Norrisville, Md. on June 23, 1934, and was the son of the late Vernon and Margaret (Heaps) Seitz. He worked for Flinchbaugh Products in Red Lion, retiring in 1992 after 34 years of service. He enjoyed trap shooting, bowling, traveling, riding his motorcycle and camping. But his greatest love was baseball. Kenny played and coached for over 25 years. He was still reliving his best baseball year ever, days before he died. That would have been 1967 when he hit .430 to win the batting championship, going 10 innings and winning over Conrads. That same year he was chosen for the All-Star team as both a pitcher and a catcher. He was inducted into the Susquehanna Baseball League Hall of Fame in 2001. Kenny formerly served as a volunteer fireman for many years with the Winterstown Volunteer Fire Company. He was a faithful member of Winterstown United Methodist Church. In addition to his wife, Gerry, he is survived by three daughters, Geri Lynn Bull (Randy) of Hopewell, N.J., Pam Rayburn of Red Lion, Tammy Jo Brooks of York; and a son, Kenyon Seitz (Stephanie Delp) of Hellam; five grandchildren, Jason Stanley, Jessica Holmes (Jason), Stephanie Metz (Tom), Meredith Bull and Cara Jo Brooks; five great-grandchildren, Caileb Stanley, Elyssa Holmes, Conner Holmes Emersyn Metz and coming soon, Hunter Stanley; a sister, Janice Fulton of Stewartstown; two brothers, M. Lee Seitz of York and Curtis Silk. Kenny was preceded in death by a brother, Heman Seitz; and his step- father, Charles Silk. Viewing will be on Thursday, October 13, 2016 from 10 to 11 a.m. at Winterstown United Methodist Church, 12184 Winterstown Road, Felton. A Service of Honor and Praise for Kenny will begin at 11 a.m. at the church with his pastor, Rev. Mitchell M. Galloway, officiating. Burial will follow at Winterstown EV Cemetery. In lieu of flowers, contribution may be offered to Winterstown UM Church, 12184 Winterstown Road, Felton, PA 17322. Kenny was a wonderful husband to Gerry, sharing 64 ½ years together, a great father, grandfather and great-grandfather. He was a friend to everyone and he had a big influence in many ways on those he met and knew. Kenny was a very caring, loving and giving man who will be sadly missed by everyone who knew and loved him. I AM HOME and I SEE YOU. Kenny has requested that all those attending the service to please dress casually.

W. Kenneth "Kenny" Seitz went home to be with his Lord and Savior after a brief illness, with his loving wife, Geraldine "Gerry" V. (Rineholt) Seitz, by his side, on Friday, October 7, 2016 at 9 p.m. at his residence at the age of 82. Kenny... View Obituary & Service Information

The family of W. Kenneth "Kenny" Seitz created this Life Tributes page to make it easy to share your memories.

W. Kenneth &quot;Kenny&quot; Seitz went home to be with his Lord and Savior...