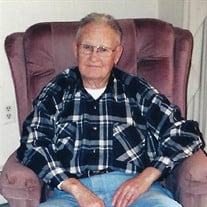 Waldo E. “Glady” Gladfelter, formerly of Red Lion, entered into God’s care on Thursday, May 23, 2019, at noon at the age of 100, at The Haven at Springwood. He was the husband of the late Ferne L. (Grove) Gladfelter, with whom he shared over 64 years of marriage. He was born in Felton, on October 9, 1918 and was the son of the late James O. and Sarah E. (Flinchbaugh) Gladfelter. Glady worked for more than 30 years as a baker at the former Mrs. Smith’s Pie Company, prior to his retirement. He was a WWII Navy Veteran, serving in Europe and Pacific Theatre. He was a member of the Dallastown American Legion Post #605 and a former member of the Red Lion American Legion Post #534 and Veterans of Foreign War in Red Lion Post 1446. Glady leaves a son, Robert E. Gladfelter and his wife Brenda of Red Lion and a daughter, Linda L. Golden and her husband Richard of Red Lion. He was the grandfather to Scott E. (Kate) Gladfelter and Brian E. Golden, all of Red Lion. Glady has four great grandsons, Daniel Gladfelter, Justin Golden, Tyler Golden and Brady Golden, as well as a sister, Doris (Gladfelter) Plummer of Stewartstown and a brother in law, Fred Kohler of Orlando, FL. , along with numerous nieces and nephews and his former granddaughter in law, Darcy Delaney of Red Lion. Viewing will be Thursday, May 30th from 9-10 am at Burg Funeral Home, Inc., 134 W. Broadway, Red Lion. A Service of Honor and Praise for Glady will begin at 10 am at the funeral home with, Rev. David D. Tietje, pastor of St. John’s United Church of Christ, officiating. Burial will be at Susquehanna Memorial Gardens with full military rites offered by the York County Veterans Honor Guard. In lieu of flowers, contributions may be offered to: York County Veterans Honor Guard, c/o Harold Redding, PO Box 713, Mt. Wolf, PA 17347 or to Homeland at Home Hospice, 2300 Vartan Way, Suite 270, Harrisburg, PA 17110. The family would like to extend a very special and heartfelt thank you to the nurses and staff of The Haven at Springwood, and Homeland at Home Hospice, for the wonderful care and compassion given to Glady and also shown to them during this difficult time. Perhaps my time seemed all to brief, don’t lengthen it now with undue grief. Lift up you heart and share with me, God wanted me now, he set me FREE. www.BurgFuneralHome.com

The family of Waldo Emerson Gladfelter created this Life Tributes page to make it easy to share your memories.

Send flowers to the Gladfelter family.