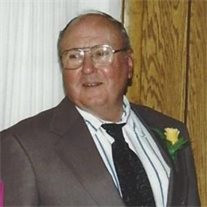 Weldon R. Burke, formerly of Red Lion, entered into God's eternal care on Saturday, July 9, 2016, at 4:40 a.m. with family by his side, at Dallastown Nursing Center at the age of 86. He was the husband of the late Doris N. (Detwiler) Burke who entered into rest on April 27, 2014. He was a longtime member of Springvale United Methodist Church in Red Lion. Weldon graduated from Red Lion High School Class of 1946 at the age of 16. He worked on road maintenance crews for Windsor Twp. and the state, later retiring from the former Borg- Warner after 25 years of service. Mr. Burke was born in Chanceford Township on December 29, 1929, and was the son of the late Charles and Elsie (Heim) Burke. He is survived by his four children, John Burke and his wife Debra of Red Lion, Susan Pritt and her husband John of Schaghicoke, NY, David Burke and his wife Leah of S. Burlington, VT and Joyce Stoltzfus and her husband Mike of Red Lion; seven grandchildren, Jeff and Ryan Burke, Dr. Bobbi Sue Pritt Ball, Julie Pritt, Levi and Seth Stoltzfus and Molly Burke. He was preceded in death by an infant son, and his two brothers, Lloyd and Elwood Burke. There will be no viewing. Cremation will take place with Burg Funeral Home, Inc., 134 W. Broadway, Red Lion. Family and friends may extend their condolences on Saturday, July 16th, from 9:30 to 10:30 a.m. at Springvale UM Church, 265 Circle Drive, Red Lion. A memorial service of Honor and Praise for Weldon will begin at 10:30 a.m. at the church, with his pastor, Rev. Thomas R. Osenbach officiating. Interment will be in Bethlehem "Stonepile" Cemetery at the convenience of the family. In lieu of flowers, contributions may be offered to Springvale United Methodist Church, 265 Circle Drive, Red Lion, PA 17356; or the Bethlehem Cemetery Association, c/o Lee Kauffman, 558 Willow Court, York, PA 17402. An avid baseball fan, Weldon played shortstop for Windsor and Brogue teams and enjoyed watching the Orioles play. Music was another interest -- he played trumpet in the Red Lion Band and especially loved marches. Hunting was a passion whether going for small game with his beagles, or spending time in a deer stand. Weldon was known for his delicious homemade apple butter; firewood precisely cut and stacked, a neatly kept lawn with ample flowers; his unique sense of humor; and his willingness to help friends or family, no matter how hard the work. Weldon's grandchildren and great-grandchildren were very special to him. Although usually a man of few words, he mentioned and inquired about them regularly, even in recent months as his health began to fail.

Weldon R. Burke, formerly of Red Lion, entered into God's eternal care on Saturday, July 9, 2016, at 4:40 a.m. with family by his side, at Dallastown Nursing Center at the age of 86. He was the husband of the late Doris N. (Detwiler) Burke who... View Obituary & Service Information

The family of Weldon R. Burke created this Life Tributes page to make it easy to share your memories.