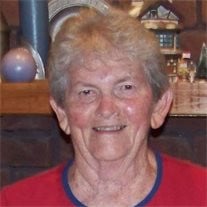 RED LION Wilhelmina "Willy" A. (Smith) Young, 81, entered into eternal rest at 1:44 p.m. Tuesday, March 17, 2015, at Manor Care - Dallastown. She was the wife of H. Lee Young, who entered into eternal rest on November 7, 1998. She was born on February 26, 1934, in her current home in Red Lion, and was the daughter of the late Levere L. Smith and Mary M. (McGuigan) Jones. Willy was a bookkeeper for Motor Freight and later took care of the books for the Masonry business she co-owned with her late husband in Red Lion. She also prepared taxes for H & R Block. She was a volunteer from 1989 to 1999 at the Kaltreider Memorial Library, acting as the Treasurer for a period of time, then became an employee in 2000 and retired from the Kaltreider Benfer Library in 2003. She served as the volunteer Treasurer for the Red Lion Youth Center for over 30 years and still served as a board member; served the community every election day at the voter tables; was active in the Red Lion Historical Society; was a former Den Leader for the Scouts and Cub Scouts; and was a lifelong member of St. Paul's United Methodist Church in Red Lion, where she worked in the nursery and formerly served on the custodial staff. Willy graduated from the Red Lion High School Class of 1952 and was the current treasurer of her high school class reunion. She contributed in many ways to the Red Lion community where she lived for all but one year of her life, and was honored by the Borough in being chosen to receive the 2013 Catherine Meyer Award. Willy, as she is fondly known throughout the community, was a wonderful, loving, and caring mother and grandmother. She enjoyed spending time with her grandchildren and attending all of their sporting events, going to the beach, and reading. Surviving are three sons, Eric O. Young of Allentown, Wade T. Young (Melissa) of Red Lion, and Dirk A. Young (Lori) of Hellam; a daughter, Cheryl L. Nitchman (Don) of Mechanicsburg; seven grandchildren, Danielle Cessna (John), Barret Nitchman (fiancee', Michelle), Hilary Nitchman, Alec Young (Emily), Mason Young, Adam Young, and Amanda Young; four great-grandchildren, Wyatt, Greta, Jude, and Joel Cessna; half brother, Jake Jones of Wrightsville; stepsister, Amaryllis Hannigan of Red Lion; a brother-in-law, Dale Young of Felton; four sisters-in-law, Gloria Gruver of Dallastown, Linda Flinchbaugh of Felton, Faye Hershey of New Park, and Mary Beth Caldwell of Baltimore, Md., and their spouses; and numerous nieces and nephews. She was preceded in death by a sister, Audrene Snyder; stepsister, Donna Mae Hannigan; and her sister-in-law, Joann Young. Viewings will be held from 6 to 8 p.m. Sunday, March 22, at Burg Funeral Home, Inc., 134 W. Broadway, Red Lion, and from 9 to 10 a.m. Monday, March 23, at St. Paul's United Methodist Church, 45 First Ave., Red Lion. A Service of Honor and Praise for Willy will begin at 10 a.m. on Monday at the church, with her pastor, Tim A. Funk, officiating. Burial will be at Red Lion Cemetery. In lieu of flowers, contributions may be offered to St. Paul's U.M. Church, P.O. Box 250, Red Lion, PA 17356; or to the Kaltreider-Benfer Library, 147 S. Charles St., Red Lion, PA 17356. Online condolences may be offered at www.BurgFuneralHome.com

The family of Wilhelmina "Willy" A. (Smith) Young created this Life Tributes page to make it easy to share your memories.

Send flowers to the A. (Smith) Young family.