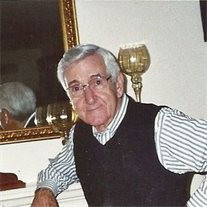 RED LION William "Bill" G. Opdenaker, 79, entered into eternal rest after a lengthy illness at 1:25 p.m. Sunday, July 20, 2014, at York Hospital. He was the husband of Ruth O. (Britt) Opdenaker. He was born in Media, Pa., on March 10, 1935, and was the son of the late Matthew and Hannah (Boyle) Opdenaker. Bill worked at Reynolds Metals in Tennessee, retiring after 27 years of service. He was a U.S. Army veteran. He was a member of St. Joseph Catholic Church in Dallastown and Knights of Columbus. In addition to his wife, Ruth, Bill is survived by a stepson, Barry L. Britt of Florida; adopted daughter, Christin M. Opdenaker of York; brother, Charles D. Opdenaker of West Chester; and nieces and nephews. He was preceded in death by an adopted daughter, Amy Opdenaker in 1984; and by three brothers. There will be viewing from 10 to 11 a.m. Friday, July 25, at St. Joseph Catholic Church, 251 E. Main St., Dallastown. Burg Funeral Home, Inc., 134 W. Broadway, Red Lion, will be assisting the family with the arrangements. A Mass of Christian Burial will begin on Friday at 11 a.m. at the church, followed by cremation. Father John McCloskey will officiate. Burial will be private and at the convenience of the family in Monte Vista Burial Park, Inc., Johnson City, Tenn. In lieu of flowers, contributions may be offered to: eukemia Society of America, Inc., Central PA Chapter, 800 Corporate Circle, Suite 100, Harrisburg, PA 17110. Bill and Ruth were happily married on April 30, 1960, celebrating 54 wonderful years together. Ruth said he was a wonderful, loving, and giving person who always put other's needs before his own. During their marriage they were lucky to have been foster parents to 38 children. He never met a stranger, everyone was his friend. Heaven is lucky to have gained such a kind and loving funny man! WE WILL MISS YOU DEARLY. Online condolences may be offered at www.BurgFuneralHome.com

The family of William "Bill" G. Opdenaker created this Life Tributes page to make it easy to share your memories.