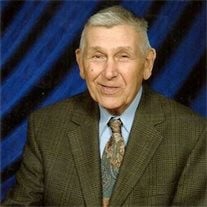 RED LION William "Bill" H. Lutz entered into eternal rest surrounded by his loving family at his residence on Tuesday, December 16, 2014 at 1:30 p.m. after a lengthy illness at the age of 88. He was the husband of Lucille G. (Morrison) Lutz, whom he married on May 13, 1950. Bill was born in Springvale on January 18, 1926, and was the son of the late J. Curvin and Edna (Williams) Lutz. Bill was a self-employed produce farmer and owner of Lutz Produce in Springvale. He also was a truck driver for Roadway Express, retiring in 1988 after 19 years of service; a member of the Teamsters Local #430 and a lifelong member of Springvale United Methodist Church, where he served as an usher. In addition to his wife, Lucille, of Red Lion, he is survived by four sons, William K. Lutz and wife Leah of Millsboro, Del., Steven L. Lutz and wife Carol of Red Lion, Jeffrey C. Lutz of Red Lion and companion Chris Burtis of Lancaster, and Gregory B. Lutz and wife Martha of Red Lion; 13 grandchildren; nine great-grandchildren; a sister, Frances Krouse of Dallastown; numerous nieces and nephews; and his beloved dog, Buddy. He was preceded in death by a great-grandson, Jack Harmon Lutz; and his two sisters, Viola Hartwell and Esther Lutz; and a daughter-in-law, Lisa A. (Diehl) Lutz. Viewings will be held Sunday, December 21, 2014, from 7 to 9 p.m. and Monday, December 22, from 10 to 11 a.m. at Burg Funeral Home, Inc., 134 W. Broadway, Red Lion. A Service of Honor and Praise for Bill will begin on Monday at 11 a.m. at the funeral home. His pastor, the Rev. Thomas R. Osenbach of Bethlehem Stonepile-Springvale United Methodist Charge, will officiate. Burial will be in Zion United Methodist Cemetery In lieu of flowers, contributions may be offered to Hospice and Community Care, 685 Good Drive, Lancaster, PA 17604;or to WellSpan VNA Home Care, 540 S. George St., York, PA 17401; or to Springvale United Methodist Church, 265 Circle Drive, Red Lion, PA 17356. Bill was a wonderful and loving husband to Lucille with whom he celebrated 64 great years of marriage. He loved his family and his grandchildren and enjoyed the times when all were together. He was the kind of person who always put the needs of others before his own. Bill loved fishing, hunting and in his younger years he was an avid softball player serving as the pitcher. He and his family are very proud that he still holds the York Fair Record, First Place prize, for the largest homegrown tomato. A golden heart stopped beating, hard-working hands at rest, God broke our hearts to prove to us, he only takes the BEST! Online condolences may be made at www. BurgFuneralHome.com

RED LION William "Bill" H. Lutz entered into eternal rest surrounded by his loving family at his residence on Tuesday, December 16, 2014 at 1:30 p.m. after a lengthy illness at the age of 88. He was the husband of Lucille G. (Morrison) Lutz,... View Obituary & Service Information

The family of William "Bill" H Lutz created this Life Tributes page to make it easy to share your memories.