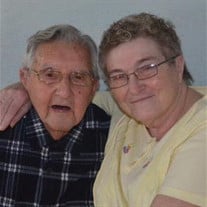 William “Louey” R. Snyder, Sr., formerly of Red Lion, entered his heavenly home, on Monday, September 9, 2019, at 4:00 am at Manor Care Kingston Court at the age of 96. He was the husband of his beloved “blue eyes”, Eileen M. (Wolf) Synder to whom he married on August 12, 1961, celebrating 58 years of marriage together. He was a good husband, and they did everything together, walking through faith and loving the Lord. William was born on June 3, 1923 in Winterstown and was the son of the late Willard Ray and Mae O. (Grove) Snyder. He was fondly known as “Tex” by his coworkers. He was a woodworking sprayer at the former Borings Manufacturing in Dallastown, retiring in 1978 after many years of service. He enjoyed hunting and fishing, and he was very talented with being able to play the guitar, fiddle and a magical harmonica player right into his 90’s. William loved the Lord, and enjoyed singing praises to his name through his gift of music with his wife. He enjoyed spending time with his children and grandchildren at the family home when they lived in Red Lion. William and Eileen attended the Red Lion Bible Church for many years. William is survived by five sons, William R. Snyder, Jr. (Jessica) of Marietta, Matthew W. Snyder (Suzette) of Red Lion, Mark A. Snyder (Ann) of Middletown, Jason R. Snyder (Tammy) of Windsor, Lee E. Snyder (companion Brenda Rupp) of Brogue, and two daughters, Virginia C. Snyder of Windsor and her former husband Mark Arnold of Wrightsville and Rose M. Natale (William Yost) of Thomasville. He was the loving grandfather of seventeen wonderful grandchildren and nineteen wonderful great grandchildren, and his dear sister, Ruth “Honey” Kreidler, along with numerous nieces and nephews. He was preceded in death by two sisters, Elfie S. (Snyder) Mitzel and Dorothy I. (Snyder) Sechrist. Viewing will be on Saturday, September 14, 2019 from 9:30 to 11:30 am at Burg Funeral Home, Inc., 134 W. Broadway, Red Lion. A Service of Honor and Praise for William will begin at 11:30 am at the funeral home with Rev. Steven A. Schmuck, officiating. Burial will be in Bethlehem “Stonepile” UM Cemetery. In lieu of flowers, contributions may be offered to the Red Lion Bible Church, 105 Springvale Road, Red Lion, PA 17356. After spending time with family at his home in Red Lion, William would always exclaim, “HAPPY TRAILS, TIL WE MEET AGAIN”, as they departed.

The family of William "Louey" R. Snyder Sr. created this Life Tributes page to make it easy to share your memories.