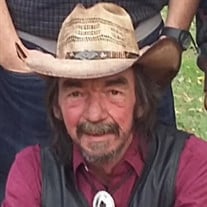 William “Bill” Richard Robinson, entered into rest, surrounded by his family, on Friday, February 7, 2020, at his home, at 5:11 AM, at the age of 56. He is the husband of Jill Ann (Shearer) Robinson, to whom he married on October 28, 2017. Bill was born in York on March 24, 1963 and is the son of Clarence L. Robinson of Brogue and the late Gail E. (Keener) Robinson. He worked in the auto salvage trade for more than 20 years. He was also a scrapper and landscaper. Bill loved Blue Grass music, animals, hunting, fishing, four wheeling and nature. He was a good, hard worker, who was always willing to assist anyone who needed a hand and he loved spending quality time with his family. Cremation will take place with Burg Funeral Home, Inc., 134 W. Broadway, Red Lion. A Memorial Service to Honor and Praise Bill’s life will be scheduled at a later date. Burial will be private and at the convenience of the family. Bill is survived by his wife, father and wife, Joy. He has three children, Robert D. Johnson of Conestoga, PA, Jennifer L. Robinson of Red Lion and Jess L. Robinson of Red Lion. He was the grandfather of; Dominik Shenberger, Faith Shenberger, Alyson Hartley, Macy Mae Hartley, Brooke Madison Johnson, Bobby Johnson, Lily Johnson. He was one of nine children, Clarence Robinson, Jr. of Manchester, Donald Robinson of FL., Daniel Robinson of Columbia, Wayne Robinson of Millersville, Steve Robinson of Red Lion, Brad Robinson of GA, Pete Robinson of York, and Angela Robinson of Felton. Bill also leaves aunts, uncles, cousins, nieces and nephews. He has three step children, April Trimmer of York, Justin Adams of York and Jenna McCoy of York, along with two step grandchildren, Zackary and Izabella Trimmer. In lieu of flowers, the family has kindly asked that donations be offered to Burg Funeral Home, Inc., to assist with the unexpected finances incurred.

The family of William R. Robinson created this Life Tributes page to make it easy to share your memories.