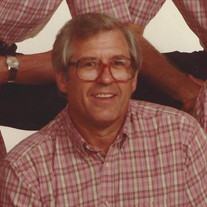 William Harvey Runkle of Brogue, went from this earthly life to eternal life on his 82nd birthday, Thursday, January 7, 2021. He was the son of the late Jesse W. Runkle and Grace I. (Smith) Runkle. He was born in Laurel PA on January 7, 1939 and was a graduate of Red Lion High School, class of 1957. Bill began his automobile mechanic career alongside his father at Smeltzer Ford in Collinsville. In 1966 he built and opened Runkle’s Service Center in Brogue which he operated until his retirement. For twenty-five years, he hosted a Saturday Bluegrass show on WGCB in Red Lion, PA. He loved bluegrass music and was a well-known musician, playing the 5-string banjo, both locally and nationally. He began his music career with Al Shade of Myerstown, PA and later traveled and recorded with Del McCoury and the Dixie Pals. Bill’s music can still be heard on Pandora and XM Radio. In his later years, he was a member of numerous other bands and often played for fundraisers in the York County area. In 2015 he was honored by the PA House of Representatives with a citation for using his considerable talents and resources to serve others thereby exemplifying the spirit of community. With family and friends, he started Bluegrass Boys Hunting Camp in Potter County (a large collection of antlers proves success!). Bill also loved the beach and spent many wonderful years at his home in Bethany Beach, DE (surf fishing but never catching very many!) He truly lived a blessed life with cherished lifelong friendships and much laughter. As the song goes, he is now “HIGH ON A MOUNTAIN.” Bill has two children, William A. Runkle of Red Lion and Rhonda S. Hausman and her husband Philip C. of York and two siblings, Gerald Runkle of Manchester and June Grove of Dover. He was preceded in death by his sisters Nancy E. Runkle and Fern Runkle. This very real and very deadly coronavirus cost Bill and so many others their lives. For the safety of all, a celebration of life service will be held at a later date. The family wishes to thank the heroic doctors and nurses at Wellspan York Hospital for their persistent grace in caring for Bill. Also, sincere thanks to his devoted friend Judy Winters. Contributions in memory of Bill may be offered to: Brogue Ambulance 39, 51 Muddy Creek Forks Road, PO Box 144, Brogue, PA 17309. Online condolences may be offered at: www.BurgFuneralHome.com

William Harvey Runkle of Brogue, went from this earthly life to eternal life on his 82nd birthday, Thursday, January 7, 2021. He was the son of the late Jesse W. Runkle and Grace I. (Smith) Runkle. He was born in Laurel PA on January 7, 1939... View Obituary & Service Information

The family of William H. Runkle created this Life Tributes page to make it easy to share your memories.

William Harvey Runkle of Brogue, went from this earthly life...

Send flowers to the Runkle family.