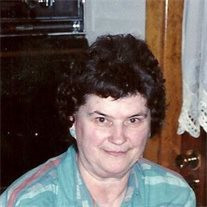 Yvonne E. Groff | Visit Guest Book RED LION Yvonne "Von" E. (Shelley) Groff, 75, went home to be with her Lord and Savior after a brief illness at 10:12 p.m. Tuesday, April 10, 2012, at York Hospital. She was the wife of James W. Groff, whom she married March 24, 1956. She was born in Red Lion, on January 18, 1937, and was the daughter of the late William G. and H. Eleanor (Cochran) Shelley. Von worked at Red Lion Area Senior High in the cafeteria, retiring after many years of service. She was also a graduate of Red Lion High School Class of 1954. She was a member of St. Pauls United Methodist Church in Red Lion for 50+ years, the National AARP, and she was a former Girl Scout Leader. Von loved shopping. In addition to her husband, James of Red Lion, she is survived by two daughters, Sharon "Sherie D. Horne and companion, Ryan Filmore of Wrightsville, and Pamela C. Lininger and husband, Erik of Middleburg, Fla.; a son, Michael J. Groff and wife, Sharon of Red Lion; four grandchildren, Tad Horne, Dustin Arnold, Matthew Whiteley, and Misha Groff; two great-grandchildren, Damian and Kyleigh Arnold; one sister, Miriam E. Shellenberger of Red Lion; brother-in-law, Gerald M. Groff of Jacobus; two nieces, Debra and Erica; two nephews, Tom and Bill; and numerous cousins. She was preceded in death by a brother-in-law, Glenn P. Shellenberger. There will be a viewing from 7 to 9 p.m. Monday, April 16, at Burg Funeral Home, Inc., 134 W. Broadway, Red Lion, and from 9 to 10 a.m. Tuesday at St. Paul's U.M. Church, 45 First Ave., Red Lion. The service will begin at 10 a.m. Tuesday at the church with her pastor, the Rev. Dr. Charles W. Salisbury, officiating Buriall will be at Susquehanna Memorial Gardens. In lieu of flowers, contributions may be made to the York Health Foundation, Cancer Patient Help Fund, 912 S. George St., York, PA 17403; or to St. Paul's U.M. Church, 45 First Ave., Red Lion, PA 17356. Yvonne "Von" was a wonderful wife to James. They celebrated 55 of the best years together as a married couple. Her children remember her as the best mother. She was a wonderful sister and she absolutely adored her grandchildren and great-grandchildren. They were everything to her. She cherished her family and they always came first in her life. However, Von was also a very loving, caring, and giving person to others and responsive to their needs. She will be sadly missed by everyone who knew and loved her. www.BurgFuneralHome.com

The family of Mrs. Yvonne "Von" (Shelley) Groff created this Life Tributes page to make it easy to share your memories.